The powerful story behind the German gymnastics team’s unitards

The powerful story behind the German gymnastics team’s unitards 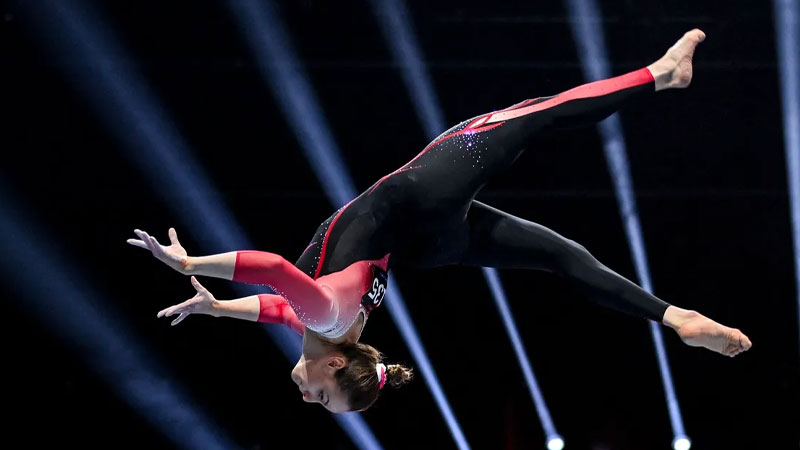 When the women's gymnastics competition at the Tokyo Olympic games will kicks off, we will all get to see athletes compete superhuman feats of strength and artistry. But that isn’t the only story. Team Germany showcased a different kind of competition gear. Not the sleeveless or long-sleeved leotard which has been the standard since the 1930s, but a long-legged unitard. A new sight at the Olympic Games, sure, but Team Germany has been rocking them since earlier this year. Their outfits are, according to the German Gymnastics Federation, a statement against, “against sexualization in gymnastics.”

The four gymnasts representing Germany, Kim Bui, Pauline Schaefer, Sarah Voss, and Elisabeth Seitz, wore fuchsia unitards with lace cutouts on the legs and collar and a silver eagle on the side today. The full-length legs are still skintight, but add a level of modesty compared to the bikini-cut leotards you’d expect to see. The actual competition uniforms will be different from the attire they wore to podium training, but it’s likely they will still be wearing unitards.

Seitz, Bui, and Voss first wore similar unitards in competition at the 2021 European Gymnastics Championships in Basel, Switzerland in April, garnering headlines. As Seitz wrote on Instagram at the time, it was to, “set an example ... to all gymnasts who may feel uncomfortable or even sexualized in normal suits. Because, in our opinion, every gymnast should be able to decide in which type of suit she feels most comfortable — and then do gymnastics.”

It’s worth noting that an athlete can face a deduction for adjusting their uniform during their routines—even if they get a wedgie. A skintight catsuit still shows off the body, but doesn’t run the risk of exposing an athlete mid-routine. For any critics who worry about a catsuit obscuring a gymnast’s form, remember that male gymnasts typically wear a singlet under comparatively loose, stirrup trousers.

The change in dress comes as women's gymnastics in the United States is facing a reckoning. Larry Nassar, a former USA Gymnastics national team doctor, is currently serving a 176 year sentence for sexually abusing hundreds of young gymnasts, including the entirety of the 2012 Olympic team and four of the five members of the 2016 team. Will unitards solve that particular kind of abuse? No, and nobody is saying it will. But it is one way athletes can regain control.

The man alleged to have murdered a 35-year-old farmer during an argument out at sea between Laucala Island and Taveuni last week has been ... 36 minutes ago

A relative of the man whose body was found under the Vatuwaqa Bridge earlier this week has come forward. Police say the victim has been identified ... 36 minutes ago