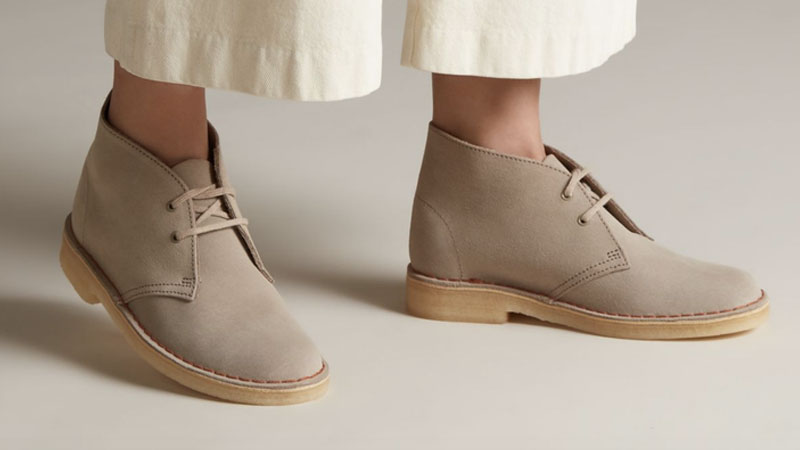 We wouldn’t be surprised if the current time period, specifically the late 2010s to the early 2020s, is one day branded as the age of comebacks.

From ’90s revivals to the return of questionable early-aughts trends—to this season’s continuing ’60s, ’70s, and ’80s renaissance—the fashion industry has been heavy-handedly leaning into the culture’s growing obsession with nostalgia in recent years.

But as old trends boomerang back into relevancy once more, some classic styles never left to begin with.

Among this echelon of enduring designs is one of the most recognizable boots in existence: the consistently ubiquitous Clarks Original Desert Boot.

Still one of today’s go-to shoe styles, the boot is celebrating its 70th birthday this year (believe it or not). For perspective, that legacy places the desert boot in an elite club of iconic, persistently-popular styles that includes a 65-year-old quilted status handbag, America's 150-year-old OG jeans—and a rare few others.

So what exactly is the secret to the decades-long success of the desert boot? Honestly, nothing more than design basics: It’s simple (made up of only two pieces of leather and a flexible crepe sole), versatile, and high quality for its accessible price.

And in part because of the shoe's pared-down make and look, we could wax poetic about the many ways to successfully style it.

Nowadays we have the luxury of being able to buy the Clarks Original Desert Boot in a few bolder colorways than the neutral-only offerings of the past.

They don’t feel like a major investment, but still deliver like one because their leather only looks better with age.

Shop our favorite pairs above; since the hall-of-fame style will likely be around for another 70 years, it’s pretty safe to say they’re a purchase that’ll be well worth it. And in part because of the shoe's pared-down make and look, we could wax poetic about the many ways to successfully style it