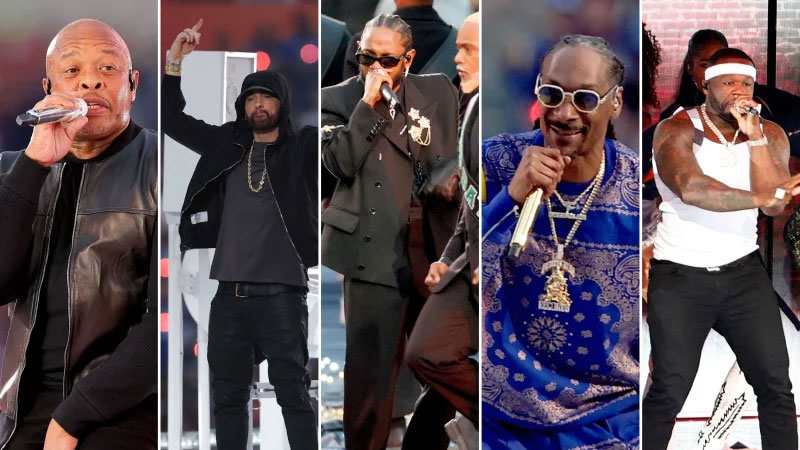 The halftime show is usually an oasis of glamour in the sweat-soaked Super Bowl but this year’s electric performance ditched high fashion for a masterclass in dad dressing.

Eminem’s signature hoodie was an obvious nod to the street but Dr Dre’s panelled black leather bomber jacket, made it clear that this eclectic posse was dressed to impress the 50-something set rather than disenchanted teens.

The most colourful father was Snoop Dogg in a bold blue bandana print tracksuit with yellow stripes, accessorised with gold chains, sunglasses, a microphone and white Converse sneakers with yellow laces.

There was a generous splash of showmanship with the top-to-toe print in the colours of the LA Rams but Snoop Dogg was dressing for comfort, looking ready to relax in a reclining chair after the show. The colours may have been crazy uncle, but the conservative fit, steering clear of oversized and on-trend silhouettes was 100 per cent dad.

The ensemble that was easiest to adapt for dads around the world came from Dr Dre, who has the most experience in this territory as the father of seven children. Leaving Snoop Dogg to dominate in colour, Dr Dre followed the Melbourne rule of dressing committing to black, right down to his high-top sneakers.

The lesson to take from Dr Dre is that black should never be basic, creating visual interest with the mix of leather and wool in his bomber jacket and fitted jeans. It was classic bordering on conservative.

“It’s important to play with texture when wearing a monotone palette and using timeless materials such as leather can also elevate the look,” said Brian Huynh founder and creative director of Melbourne menswear brand Mndatory. Having created a popular leather puffer jacket that costs $2190, Huynh supports the use of top quality materials.

“For men of a certain age there’s something to be said for investment dressing and wearing pieces that can be handed down to your children,” Huyn said. (Now Dr Dre has to decide which of his three surviving sons to leave the jacket to.)

In even less basic black from Louis Vuitton, Kendrick Lamar seemed to be inspired by halftime show victim and survivor Janet Jackson, who suffered an infamous wardrobe malfunction wearing Alexander McQueen at the televised event with Justin Timberlake in 2004. On social media some observers thought that the black tailored suit, elevated by an assortment of gold brooches, was a reference to Michael Jackson but the polish and uniformity with his backing dancers was pure Janet circa Rhythm Nation.

Janet Jackson may seem an unlikely pin-up for dad dressing but if fathers embraced their feminine side with accessories, young men would have more creative tools to express themselves than popped collars on polo shirts and snippy slogan T-shirts.

Expect to see the brooches for boys trend accelerate on the red carpet at the upcoming Academy Awards, with comedian Trevor Noah having worn a Tiffany brooch to the 2021 Grammys and Black-ish actor Anthony Anderson sporting a Chopard brooch at the 2021 Golden Globes.

Above the ankle Eminem’s style hadn’t shifted greatly since his 8 Mile heyday, but the sneakers would have anyone who likes basketball salivating. Eminem’s Air Jordan 3 sneakers were personalised with E monogrammed tongues and rubber accents with a “Slim Shady” name tag. It was more than enough for the rapper to achieve instant cool dad status.

Coming in last in the style stakes was father of two, 50 Cent, who began his surprise appearance by singing upside down. The dance party white singlet with Christian Dior belt and Andre Agassi headband put a dint on the rapper and actor’s style scorecard. 50 Cent can take some pleasure that he was more stylish than Coldplay in 2015, but this was a look that would embarrass most kids – perhaps making him the greatest dad of them all.