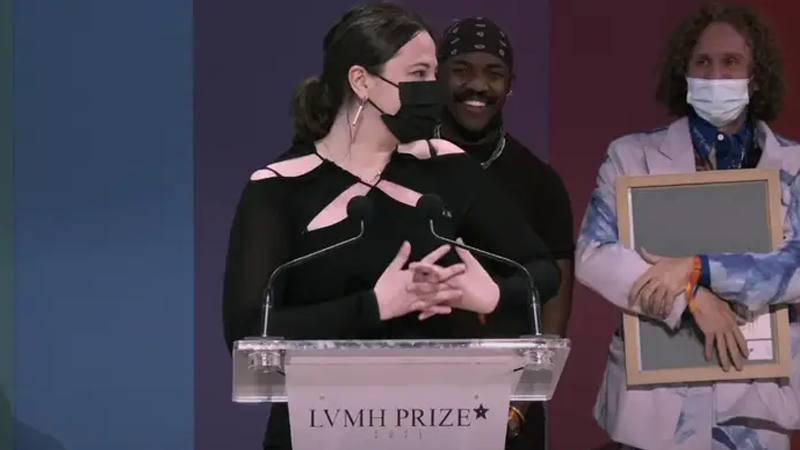 London-based designer Nensi Dojaka has been announced as the winner of this year’s LVMH Prize for Young Designers, receiving a 300,000 grant as well as a year-long mentorship programme hosted by LVMH executives.

Known for her complex mini-dresses and organza designs, the Albanian designer was selected based on future potential, with a group of industry experts including Virgil Abhol and Stella McCartney making the final decision. With a shortlist of nine other up-and-coming finalists, the LVMH Prize for Young Designers aims to assist in the emergence of new talent and promote diversity in the industry.

“I don’t know what to say,” Dojaka said in a short, emotional speech while accepting the award. She continued: “Thank you so much, I was not expecting it. I am honoured that all of you guys are here,” while pointing to the small crowd behind her.

The show, hosted by influencer Emma Chamberlain and journalist Derek Blasberg and located at the Louis Vuitton Foundation, was presented in a live stream over YouTube, with a small in-person audience made up of nominated designers and industry professionals.

Three designers won the Karl Lagerfeld Special Jury Prize, created as a tribute to the late designer. Lukhanyo Mdingi from South Africa, Rui Zhou of the genderless Shanghai brand Rui and New Yorker Colm Dillane from Kid Super will each receive 150,000 euros, alongside a one-year mentorship programme from LVMH.

It is the first time in two years that the show has been aired after the cancellation of the 2020 event due to covid-19 concerns. For the previous edition the cash prize was instead split equally between the eight finalists.

The man alleged to have murdered a 35-year-old farmer during an argument out at sea between Laucala Island and Taveuni last week has been ... 38 minutes ago

A relative of the man whose body was found under the Vatuwaqa Bridge earlier this week has come forward. Police say the victim has been identified ... 39 minutes ago