The Speaker of the House recycled the same black outfit she wore for President Donald Trump’s 2019 impeachment hearing for Wednesday’s proceedings.

The Speaker of the House recycled the same black outfit she wore for President Donald Trump’s 2019 impeachment hearing for Wednesday’s proceedings. 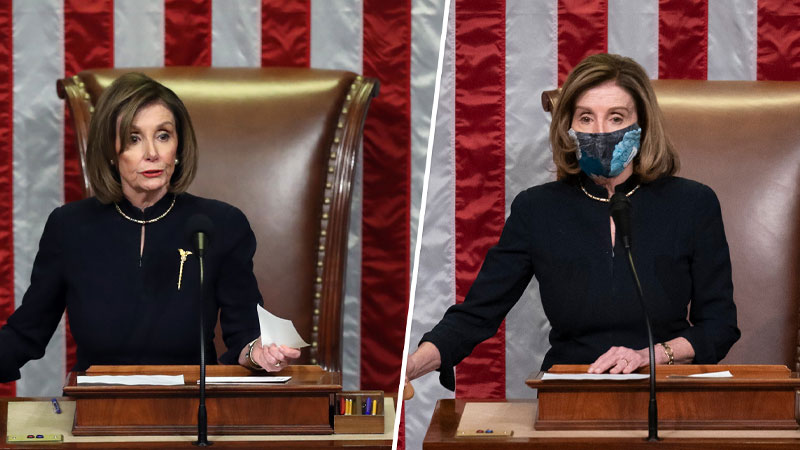 Nancy Pelosi's outfit in 2019 vs her outfit worn for the second time during Donald Trump's impeachment hearing 2021. [Image: vogue]

This is the same outfit she had worn for the impeachment of the president in 2019.

The House voted to impeach the president for a second time for his role in inciting violence that led to the pro-Trump insurrection at the U.S.

Capitol on Jan. 6, which left five people dead. Ten Republican members of Congress voted against Trump, resulting in a 232 to 197 vote to impeach.

Pelosi’s outfit during Trump’s second impeachment hearing differed slightly from that of the first.

This time the speaker did not accessorize her suit with her golden mace brooch created by jeweller Ann Hand and instead complimented the look with a patterned face mask.

Pelosi implemented a new rule on Tuesday that all members of Congress must wear face masks while on the floor following several members testing positive for COVID-19 after last week’s insurrection.