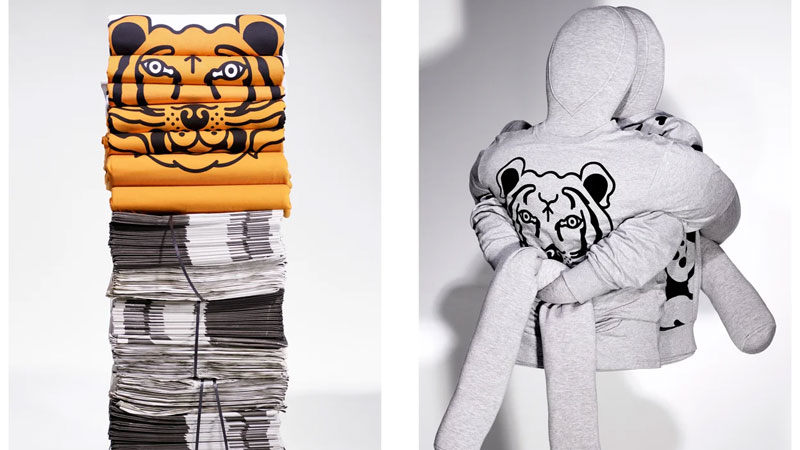 Due to illegal trade and habitat destruction, the world’s population of wild tigers has declined by 95% in the past century to just 3,200, pushing the species to the brink of extinction.

Beyond that crushing detail, their dwindling numbers have a vast ripple effect as predators at the top of the food chain, tigers play an important role in maintaining balance in forest ecosystems, which support thousands of other species and people too.

All of this was on Felipe Oliveira Baptista’s mind last year when he joined Kenzo, the French label known for its distinctive tiger logo.

One of his first tasks was to redesign it, and he’d recently come across an article about the World Wildlife Fund’s efforts to double the global tiger population by 2022.

Baptista reached out to the WWF to discuss a collaboration, and the first capsule is debuts T-shirts, hoodies, and “essential garments” in GOTS-certified organic cotton (the worldwide textile-processing standard for organic fibers) printed with Kenzo’s new tiger, with US$10 from every purchase going to the WWF.

A new capsule will drop every six months to continue driving support for the cause.

This project follows a similar one Baptista launched as the creative director of Lacoste back in 2018: a collection of polos featuring endangered species in place of the brand’s signature crocodile logo, like the Iberian lynx and the Hawaiian monk seal, with a percentage of proceeds supporting the International Union for Conservation of Nature.

“It goes beyond fashion,” he says. “I think customers are becoming more and more sensitive to this too, and will demand [action] in the future. We have to question everything we’re doing, and it all starts with one step.”

Kenzo’s new capsule with the World Wildlife Fund was launched on September 28 and is available exclusively on kenzo.com.