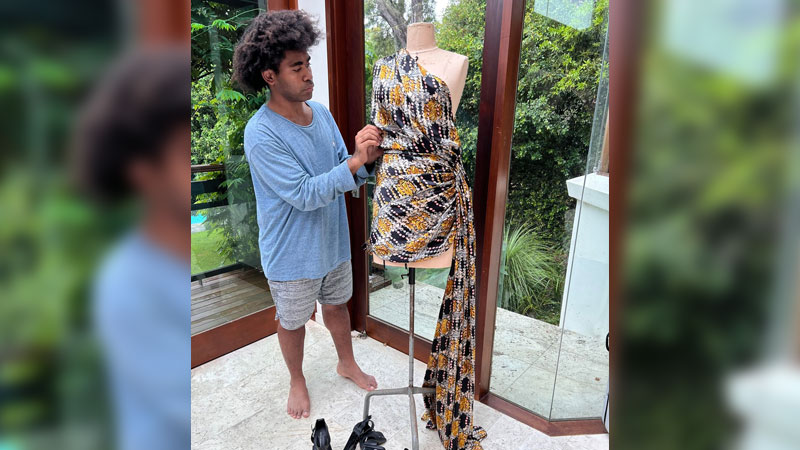 Laisiasa Davetawalu who as a passionate 15-year-old boy took part in the Fiji Fashion Week sulu-jaba competition 10 years ago is now working for one of Australia’s leading clothing brands and is also one of the very first iTaukei students to graduate from the Fashion Design Studio in Sydney.

Davetawalu who graduated with a Bachelor of Fashion and Design earlier this year says his journey in establishing himself began when he skipped school in Form 5 and walked into the Fiji Fashion Week office.

He says he took part in the 2018 Fiji Fashion Week as an emerging designer after which Managing Director, Ellen Whippy-Knight took him under her wings and got him into the fashion school.

The 24-year-old says he felt home sick in Sydney because he had never left his family for a long time and it was hard to keep going, make new friends, start again and adjust to the new environment.

Davetawalu also says it was also challenging to get a job to support himself and even though Whippy-Knight was supporting him, it was nice to have some extra money which is why he took up gardening and other jobs around the neighbourhood.

He says he started working for Zimmerman when they had sent out an expression of interest for students looking for weekend job and only 5 of them got a reply.

The young fashion designer further says he has been with Zimmerman since November last year and it was only meant for a week but he is still there and he is enjoying it.

He says he will be showcasing 8 of his original looks from his graduate collection and an additional 12 looks.

He says he wants to see himself growing in the industry and starting his own brand after learning the ropes at Zimmerman in the next five years.

The Kadavu lad adds for anyone who wants to make it into the industry, they need to work hard, believe in themselves and stay true to who they really are.

This will be the 15th anniversary for the Fiji Fashion Week and tickets are still available. For bookings tickets@fijifashionweek.com.fj

The Deputy Prime Minister and Minister for Finance, Professor Biman Prasad has met with the Indian External Affairs Minister Dr. S Jaishankar in ... 40 minutes ago

Landowners are not forgotten and their concerns are a priority that needed to be addressed. This has been highlighted by the Minister for ... 42 minutes ago

As people always look for better opportunities and living standards, no recognition and lack of reward contributes to the issue of labor brain drain ... 44 minutes ago