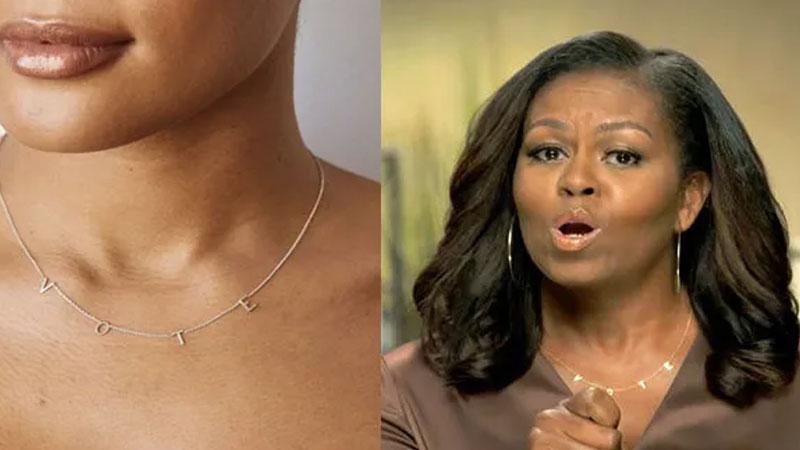 Throughout Michelle Obama’s powerful 18-minute virtual Democratic national convention speech one message was clear: V-O-T-E, spelled out not just through her evisceration of Donald Trump but also by the letters of her necklace.

“Vote for Joe Biden and Kamala Harris like our lives depend on it,” Obama said, while wearing a gold necklace that quickly went viral, and became a top US Google search term during the last hour of the convention.

This piece was from ByChari, a small Los Angeles-based jewellery company owned by Chari Cuthbert, who is African American.

Obama’s decision to promote Cuthbert echoes a trend seen also on the recent cover of British Vogue, in which 40 activists wore clothes largely by BAME designers, for influential people and organisations to seek out small black-owned businesses to promote, rather than defaulting to the largely white-run conglomerates that dominate the fashion industry.

Obama is a master of using her clothes to create a visual message, and in promoting marginalised and under-the-radar businesses with her style choices.

Cuthbert, who launched ByChari in 2012 and recently spoke to Time magazine about the challenges of running her business during the pandemic, tweeted on Monday night that she was “beyond honoured and humbled” that Obama wore her necklace.