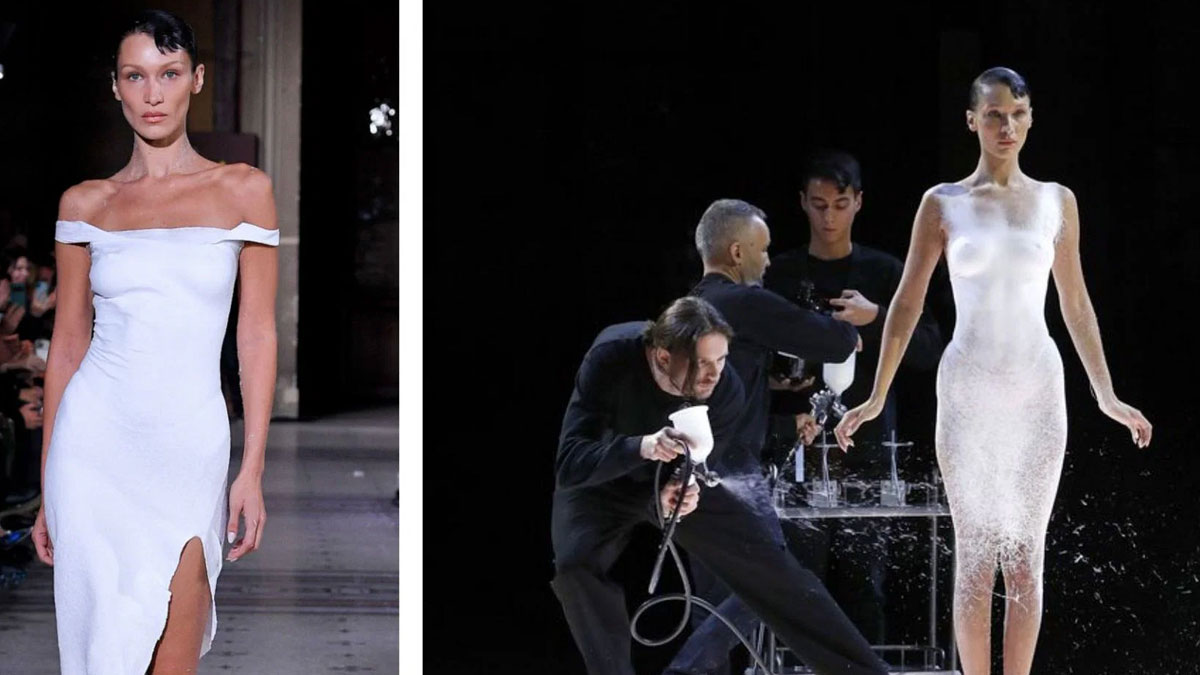 Bella Hadid closed French label Coperni's Spring-Summer 2023 show with a dress that was sprayed on in front of a live audience.

The supermodel walked onto the runway wearing nothing but nude underwear before Manel Torres — the creator of the patented spray-on technology, Fabrican — and two scientists applied a misty liquid that transformed, almost instantly, into a wearable material.

For nearly 10 minutes, guests watched in awe as Torres and his team realized Coperni's design in real time. To finish the dress, the label's head of design, Charlotte Raymond, walked onstage and gently manipulated the neckline while it was still drying and cut a dramatic leg slit.

The dress had no seams and no hem. And, from afar, the fabric looked like a smooth jersey that appeared to move with the ease of a T-shirt. But when Hadid completed a lap around the runway, one could see a gentle texturing reminiscent of water droplets.

While the dress won't be for sale, Meyer said it was important to push the boundaries of technology and design, and to create a moment that may go down in fashion history. Those in the audience appeared to be impressed — including Kylie Jenner, Jeanne Damas and Alexa Chung, who all cheered loudly — while footage of the finale soon went viral.

"We're not going to make money on this but it's more of a celebration of innovation and having strong moments in fashion because we're passionate about pushing fashion forward," said Coperni's CEO and co-founder, Arnaud Vaillant, ahead of the show.

The collection also featured a nod to actress Fiona Johnson's red dress in "The Matrix," as well as a series of jackets with boxy shoulders referencing the silhouettes of characters in the online game Roblox.