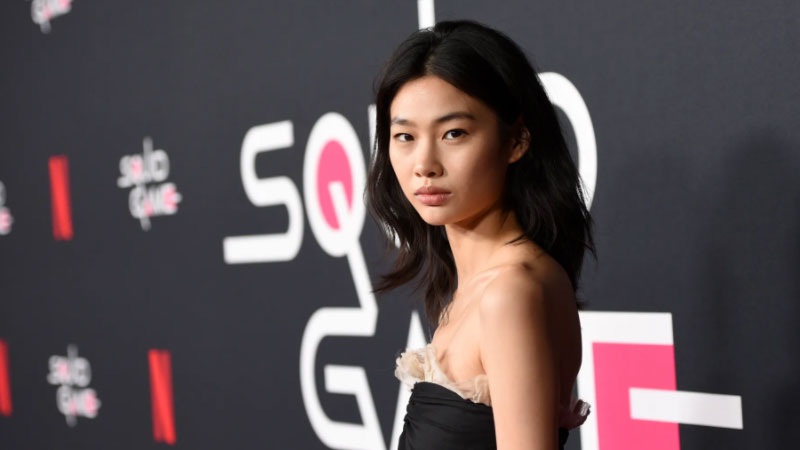 Prior to that show’s success, however, you might have known Jung from her modeling career: She’s walked during Seoul Fashion Week several times, as well as for Louis Vuitton, Marc Jacobs, Max Mara, Fendi, and more.

1. She’s got friends in high places.
Jung is close friends with Blackpink singer Jennie, who once sent a food truck to the set of Squid Game.

2. She’s a Top Model alum.
Jung competed on the fourth season of Korea’s Next Top Model in 2013, placing as runner-up.

3. She has the highest following on Instagram of any Korean actress.
Jung gained a whopping 15 million Instagram followers in only a matter of weeks following the release of Squid Game, putting her well on her way to becoming one of the best-known actresses currently working in South Korea.

4. She doesn’t take her breakout TV role lightly.
Jung created an extensive journal for her Squid Game character Sae-byeok, telling Vogue’s Janelle Okwodu, “[In some ways] her life was very similar to my life abroad. During those times, it was difficult to share my emotions [and] celebrate with family and friends when something good happened or figure out what to do when something bad occurred. Everything [I felt] dwelled in my head and my head only. Hence, I could understand her loneliness and how she empowered herself.”

5. She’s in a celebrity power couple.
Jung is reported to be dating fellow South Korean actor Lee Dong-hwi, who is known for his role on the TV series Reply 1988 and who also had roles in The Handmaiden and Extreme Job.

Good news for drivers as the price of unleaded fuel will decrease to $2.62 from today. The Fijian Competition and Consumer Commission says the ... 35 minutes ago