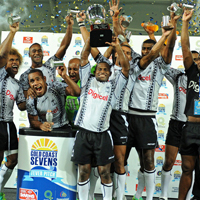 It was sweet revenge for the Digicel Fiji 7s team after they demolished New Zealand 26-12 in the Gold Coast 7s final in Australia.

New Zealand earlier beat Fiji in pool play 28-5 but Fiji came out firing and outsmarted the Kiwis in the final.

Fiji started strongly in the final after captain Setefano Cakau scored in the third minute of the first half but New Zealand’s king pin Tomasi Cama Junior cancelled the lead after scoring two successive tries to lead the first half 12-7.

Three unanswered tries by Fiji in the second half to Joeli Lutumailagi, Emosi Vucago and Watisoni Votu were enough to seal the much awaited win.

Osea Kolinisau said divine intervention was the key to their success and they dedicated the win to their diehard fans.

Fiji will head into the next leg of the IRB World Sevens series next weekend as favorites in Dubai leading the points table with 22 points, New Zealand sits in second with 19, South Africa holds third spot with 17 points and Australia claims fourth position with 15 points.

Fiji have drawn in Pool A with Samoa, Argentina and the United Arab Emirates for the Dubai 7s.

Permanent Secretary for Health, Doctor James Fong says the main priority of the Australian Medical Assistance Team coming in will be on creating ... 9 hours ago