Villages In Favour For Changes

Villages In Favour For Changes 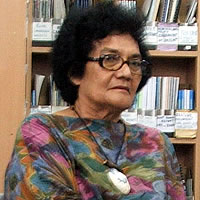 The National Council For Building a Better Fiji has been told by its Public Relations team that of the 1,000 villages and settlements they have visited so far, majority of them want a change through the People's Charter.

NCBBF member Lorine Tevi said many people are in favor of changes to the Electoral Reform.

The NCBBF said this contradicts the generally negative perception which comes through the mainstream media and in particular from vocal opponents to the People's Charter initiative.

The Public Relations team also received up to 2000 oral and written submissions and responses to the national issues outlined in the Consultation Document.
Latest Videos

SODELPA MP Salote Radrodro has told the High Court that she had complied with all the requirements when making Parliamentary claims. Radrodro is ... 5 hours ago

SODELPA Leader Viliame Gavoka says the focus for them is the revenue measures for the government and their method of collections. While responding ... 5 hours ago

Bred Bank Fiji is celebrating its 10th year anniversary and is happy because the bank has had accelerated growth over the last 3 years. Bred Group ... 6 hours ago
More News
TOP