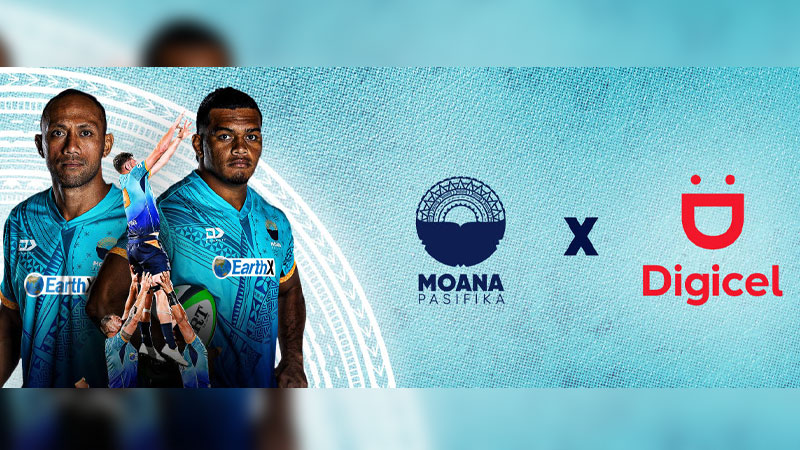 Moana Pasifika has announced that Digicel Pacific has today signed on as a sponsor.

They are the new sponsor for the jersey sleeve for the 2022 season.

Digicel’s TV services – Digicel TV and Sky Pacific brings the game of rugby into the homes of many of the Pacific Island nations and has held exclusive TV broadcast rights for the Pacific region for Super Rugby, Rugby Championship and various international premium competitions since 2016.

Moana Pasifika’s CEO Pelenato Sakalia says their partnership with Digicel is significant for Moana Pasifika and we are excited to welcome them into our family.

He says Digicel is very familiar to our Pacific community and has a special place in our hearts, particularly for their work after the recent eruption in Tonga.

She says their partnership with Moana Pasifika based in New Zealand will see them proudly engage with fans and support the club for the remainder of their inaugural season and they are confident it will be the start of a very healthy relationship.

A man and his wife who sexually exploited two young girls in Nakasi two years ago, will spend 16 years and 10 months behind bars. The man and his w... 26 minutes ago
LATEST NEWS

Fiji has recorded 66 new COVID cases since Friday. 14 new cases were recorded on Friday, 36 cases on Saturday, 10 cases on Sunday and 6 new cases ... 18 minutes ago

5000 youths are expected to benefit from the Open Skills Training that will be provided by the Commonwealth of Learning in partnership with ... 20 minutes ago