Crusaders players breach lockdown by training together in a park

Crusaders players breach lockdown by training together in a park 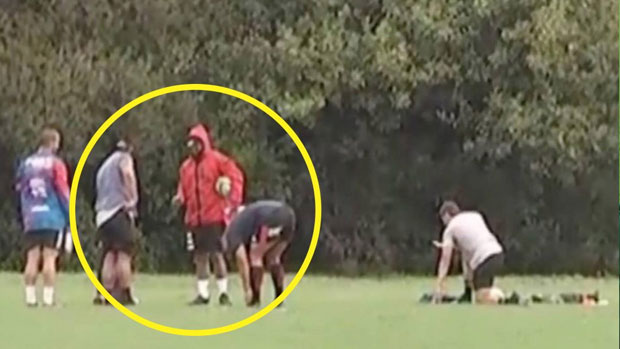 A few of the crusaders players that got together for a training session. [image: Rugby Onslaught]

The Crusaders have spoken to a group of players that were filmed together at a Christchurch park.

The gathering, which included All Black first five Richie Mo'unga, is against the rules set out by the New Zealand government in relation to coronavirus lockdown.

In a statement the Crusaders said the Crusaders are aware of some of their players training at Malvern Park in Christchurch yesterday.

They say management have spoken with the players involved, all of whom live within walking distance of Malvern Park.

The club says they are confident this was not an organised training session among the group, but rather one group of flatmates training in their 'bubble' who were coincidentally joined by a second group.

They say meanwhile, one player completed running blocks individually. While these players made a conscious effort to observe physical distancing, they did share equipment by throwing and kicking a rugby ball among themselves.

Crusaders CEO Colin Mansbridge says in the midst of the Covid-19 pandemic, this is a time when their community needs to work together and look after one another, and the players are social leaders in that regard.

$20,000 has been donated by Macao-based Chinese company David Group and its charity arm, Soi Ian Charity Association to the COVID-19 Relief ... 28 minutes ago

A live tsunami siren test will be conducted in the Central Division from 10am to 11am tomorrow by the National Disaster Management Office in ... 40 minutes ago

Rakiraki businessman George Shiu Raj says they are intending to build a supermarket in Rakiraki Town at the site where his buildings were destroyed ... 41 minutes ago