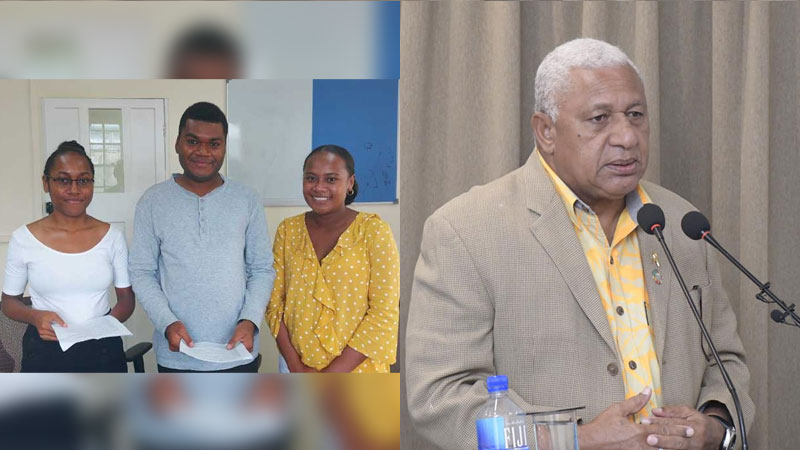 [Image: Office of the Prime Minister, Republic of Fiji]

The Youth for Integrity Network has welcomed Prime Minister Voreqe Bainimarama’s comments that the Draft Police Bill will not go in its current form to Parliament.

Bainimarama says he has noted concerns from the public and he will be making his views known on the matter when he meets the senior Police Officers.

When contacted by Fijivillage, Police say they will not make any comments.

Youth for Integrity Fiji says they appreciate the Fijian Government being sincere in its intention but the Draft Police Bill is presented during an extremely challenging period when the COVID 19 pandemic has disrupted our lives.

It says the draft bill should be delayed in its submission to Parliament until 2022 when the situation in the country has normalised as Fijians seem to be divided during this pandemic period.

In some of their recommendations on the amendment of few sections of the Draft Police Bill, they have proposed the provision of youth engagement and reassurance under the Functions of the Force.

It says a yearly round table conference should be held for youth leaders, the Police Commissioner and senior officers to problem-solve ways of strengthening law and order in Fiji.

This is because they feel there is always the possibility of a renegade Police Commissioner abusing his powers on his own will or through influence or direction from extra-legal sources.

It further recommends that subject to the presentation of a warrant, any police officer or authorised police employee may access and designate any cyberspace as a crime scene, whether used for private or public purposes, where such police officer has reasonable ground to believe that a crime has been committed.

While many people accept the Police Act needs to be modernised, they are raising concerns about some sections of the Draft Police Bill after it was made public.

The proposed law says a police officer or special constable may search any person, animal, vehicle or vessel at the crime scene or in the immediate vicinity of such crime scene.

The Draft Police Bill also says any police officer or any other authorized police employee may seize, without warrant, any electronic storage device which is found in any crime scene or in the possession of any person detained or arrested or anywhere in any public place.

There are also provisions in the Draft Police Bill to deploy police as soldiers subjected to military law during emergency situations.

The Draft Bill empowers the President to employ the Police Force and subject it to military law during an emergency or war.

It defines emergency situation as natural disasters, man-made disasters and any other situation which give rise to or may give rise to casualties, and or damage or loss of property, infrastructure, essential services or affects the means of livelihood or health or the general wellbeing of the public on a scale which is beyond the normal capacity of the affected communities to cope with unaided.

Concerns have also been raised on provisions like the imposition of upto life imprisonment or $1 million fine on people who refuse to provide passwords of their electronic devices, police being allowed to eavesdrop and record conversations and recruitment of informers through lure of payment.

Face to face consultations on the Draft Police Bill will be held at the Serua Provincial Council Hall in Navua from 9am to 1pm tomorrow.

As pre-polling starts from Monday in over 660 locations, Supervisor of Elections, Mohammed Saneem says the time period for voting for each area ... 58 minutes ago