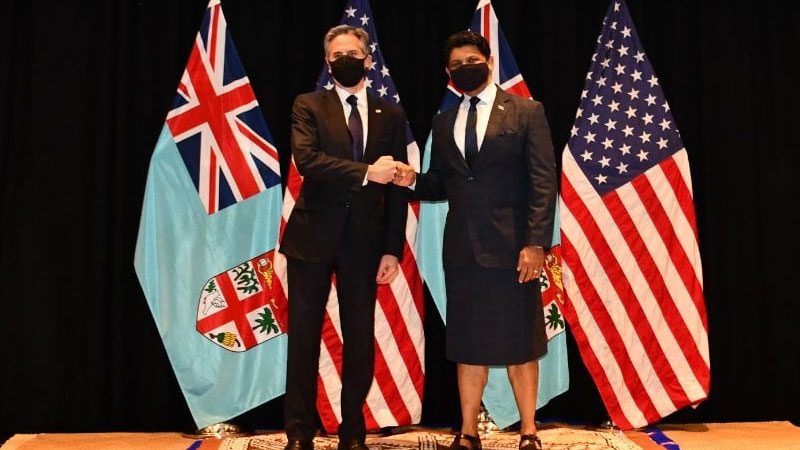 Acting Prime Minister, Aiyaz Sayed-Khaiyum says Fiji would love to export more of our kava as well as ginger, taro, turmeric, sugar, Fijian chocolates, cosmetics and other Fijian-grown and Fijian-made products to the US.

While speaking in a joint press conference with the US Secretary of State, Antony J. Blinken this evening, Sayed-Khaiyum says Fiji also welcomes US firms looking to participate in our growing outsourcing services sector adding that we have young, well-spoken, English speaking, tech-savvy and frankly, very friendly people who would love the opportunity.

Sayed-Khaiyum says in their meeting they also spoke on Fiji’s role in leading a regional recovery from the COVID pandemic.

He also says Fiji is keen to open more of the US export market to our farmers.

The Acting PM adds as a nation that shares many of our struggles and our values, America is uniquely positioned to be a direct partner to Fiji for peace and climate security not only across the Indo-Pacific, but here in the Blue Pacific.

He says Fiji and America are both working in support of a more secure, stable and peaceful region, but there is far more we need to do together as partners in this battle of our lives.

Sayed-Khaiyum says Blinken’s visit to Fiji is the first in almost 40 years, but today has not been about the last four decades.

He adds It is about the many more to come; decades that our nations will meet together as enduring partners, with shared values, enlisted with humanity in overcoming the greatest challenges of our time.

Meanwhile, Blinken says they are working together to build Fiji's capacity to prevent, detect and respond to future health emergencies.

While speaking during the press conference tonight, Blinken has also stressed that this visit is not about them being focused on security reasons.

He highlighted when a journalist from an international media organization, Reuters said that it seems the US only tries to grow its presence in the region when it perceives security threats.

She said this was seen with Japan during World War 2 and now China.

The journalist questioned how the US can maintain authentic engagement that speaks to the real needs of the Islanders as well as imbalancing China's presence in the Pacific.

Blinken says they see the Pacific as the region for the future which is vital to their own prosperity and progress.

The Secretary of State also says just this week 3 ship riders from Fiji are joining the crew of the US Coast Guard to conduct patrols in support of maritime security.

He says the United States is proud that several of Fiji's future leaders are being training in their military academies.

Blinken adds Fiji was the first country in the world to ratify the Paris Agreement.

He says Pacific Islanders are proud who beleive that no matter where size, they alone should be able to choose their path whether how they use their natural resources or who they partner with.

Blinken says they share that belief and think that the world is a more secure and prosperous place when core international principles like that are respected.

He says you can see the strength of their commitment to the Pacific through United States partnership with Fiji.

Blinken says together the two countries are taking on major issues.