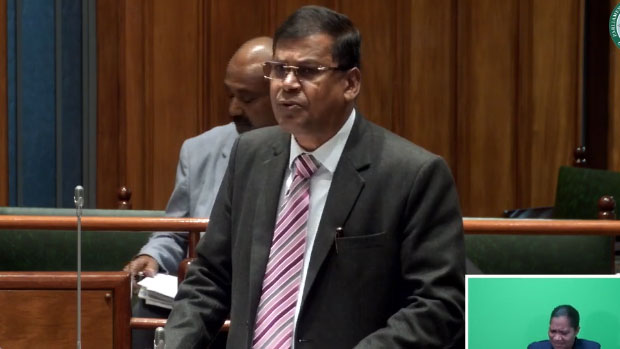 National Federation Party Leader Professor Biman Prasad says they support some of the measures in the COVID-19 response budget however he labelled it as a disappointing and dishonest budget.

While making his contribution to the budget debate, Professor Prasad said the government did not bring the virus in the country but he says we are confronting a double tragedy.

He says the first tragedy is the devastation and loss the virus will bring and the second is that we do not have money to respond to it.

Professor Prasad says it is not a billion-dollar budget.

The NFP Leader adds that the government is only doing two useful things which are topping up FNPF accounts and increasing the health ministry’s budget. He says after that it is up to everybody else.

Professor Prasad says in his view the government is hoping that the crisis will not get worse adding that this is the first government that always runs to the FNPF.

The NFP Leader was talking about the FNPF when Attorney-General, Aiyaz Sayed-Khaiyum raised a point of order.

Prasad also claimed that the health ministry has only conducted less than 200 tests for COVID-19.

Minister for Health, Dr Ifereimi Waqainabete clarified that they have done more than 200 tests.

Meanwhile, Prasad says his understanding was that he had 20 minutes to respond to the COVID-19 Supplementary Budget.

He made these comments after Speaker of Parliament, Ratu Epeli Nailatikau interjected Professor Prasad and asked him what was his time limit.

Ratu Epeli says that he was informed by the whips and his understanding was that members will have about 7 minutes.