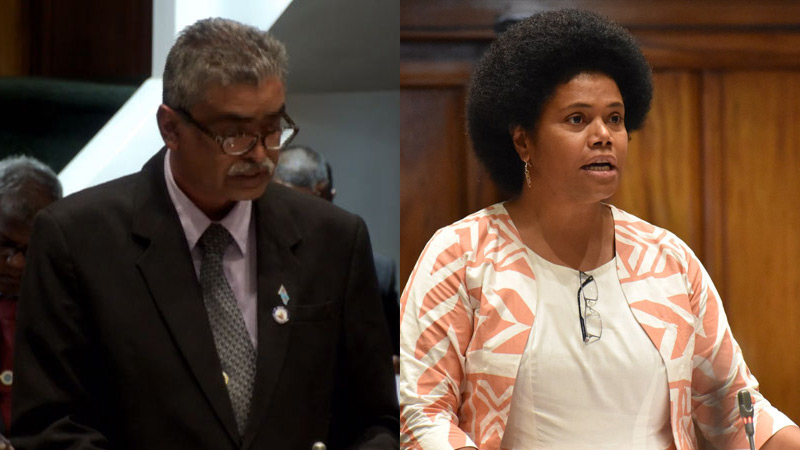 Assistant Minister for Agriculture, Waterways and Environment, Viam Pillay has asked NFP MP, Lenora Qereqeretabua where was her manners when she cursed their children earlier this year - adding she is absolutely right in that manners maketh man.

While speaking during the 2020/2021 National Budget, Pillay says Qereqeretabua’s act of cursing innocent children, including those who are yet to be born, tells them what she is made of.

He also says while Qereqeretabua was posting pictures on her Facebook page, the Minister for Economy was up until the early hours of the morning with his team drafting a very big and complicated budget for weeks and weeks.

Pillay says Aiyaz Sayed-Khaiyum was sacrificing his personal time and sleep to go out on the ground and talk to Fijians while Qereqeretabua was posting pictures of birthday cakes on her page.

He says there is nothing wrong in Qereqeretabua doing personal things with her family.

Pillay told Qereqeretabua not to try to come to parliament and suggest that the Minister for Economy is not a servant of the people when he has done more for this country in the last 2 months than Qereqeretabua has done in her entire life.

He says perhaps the former beauty queen does not quite understand how difficult drafting a National Budget is.

Pillay says that he would rather wait 1 hour and get the best budget than try to rush such a thing.

He adds even up until the last minute, the hardworking budget team is working non stop to ensure everything is correct.

He adds Qereqeretabua or whichever lawyer wrote her speech, seems to have something very personal against the Minister for Economy.

Meanwhile Qereqeretabua says the 2020/2021 National Budget got off to a bad start as the Minister for Economy delayed the delivery by more than a hour.

She says Aiyaz Sayed-Khaiyum did not give an explanation nor did he apologise for the delay.

She also today paid respect to people and groups who have used their own resources to reach out and help the desperate families.

Qereqeretabua says this is a government that has been reckless and wasteful adding it has stubbornly refused to accept advice from anyone.

She adds it behaves as though one man knows everything.

Qereqeretabua says at a time when we should be encouraging local production, and saving foreign exchange, the budget encourages cheaper imports.