Transgender and gender non-conforming people continue to be subjected to staggering levels of violence, verbal abuse and harassment, and discrimination in Fiji and the Pacific - Vulavou

Transgender and gender non-conforming people continue to be subjected to staggering levels of violence, verbal abuse and harassment, and discrimination in Fiji and the Pacific - Vulavou 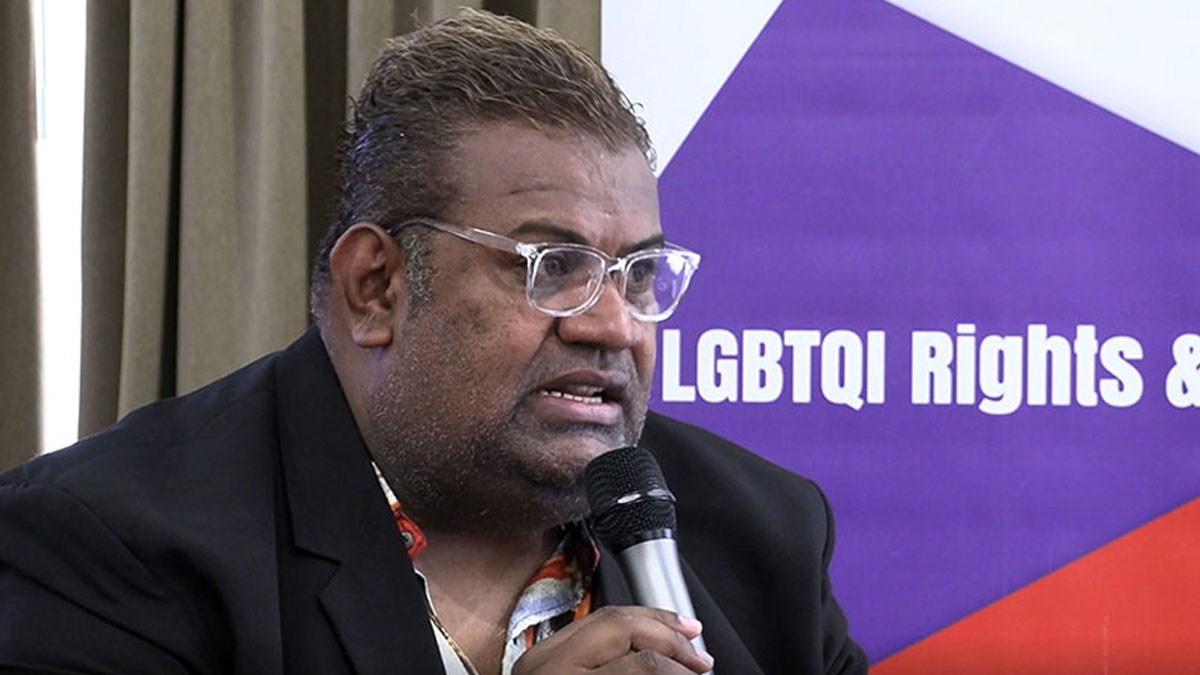 Pacific Sexual and Gender Diversity Network CEO Isikeli Vulavou says in Fiji and the Pacific, transgender and gender non-conforming people continue to be subjected to staggering levels of violence, verbal abuse and harassment, and discrimination on the basis of their gender identity or expression.

In a message to commemorate Transgender Day of Remembrance Vulavou says we can’t deny that the Pacific has a very rich cultural history which was inclusive of transgender and gender diverse people, however, their existence has been overshadowed by colonialism which attempted to erase them, leading to the structural discrimination, violence, and stigma that they face today.

The CEO says transgender individuals continue to face barriers to justice and persistent stigmatization, as well as marginalization and under-representation across health, employment, economic, and social systems, and these have been worsened by the multiple waves of the COVID-19 pandemic.

Vulavou says despite all the efforts and awareness-raising by transgender and LGBTQI civil rights groups, many Pacific countries such as the Cook Islands, Kiribati, PNG, Samoa, the Solomon Islands, Tonga, and Tuvalu continue to criminalize LGBTQI people, creating an environment of fear and installing systemic barriers to freedom, equality, and just living.

Vulavou says health services are devoid of specific transgender health services and lack of gender recognition for them as they continue to be forcefully lumped together with women and men.

The CEO is calling upon Pacific Island leaders, parliamentarians, and lawmakers to combat the disturbing proliferation of discriminatory state legislation targeting transgender people and criminalizing them.

Vulavou says governments must not turn away from their suffering but address the structural conditions and inequalities that shape transgender people’s everyday lives.

Vulavou says leaders must strive for a Pacific where transgender people should be able to receive an education, seek employment, access health care, especially transgender health care, and engage democratic institutions safely and with dignity, no matter where they live.

Vulavou further says as resilient and accepting Pacific islanders, we need to draw strength from one another to take on the uncertainties, address the epidemic of violence, hate, and discrimination, and advance equality for transgender and gender diverse people.

They say no one deserves these horrifying acts of violence and every life is precious and deserves freedom, justice, respect, love, dignity, and fair treatment.

Vulavou says while we carry the memories of transgender people we have lost in our hearts and pray in anguish for their families, we must continue to act every day to put an end to this heinous crime.

Vulavou says let us honour the lives of the many transgender and gender non-conforming people in Fiji and the Pacific who have been taken from us by violence rooted in bias, hate, and intolerance.

Transgender Day of Remembrance is marked annually in many parts of the world to honour the memory of people who have been murdered, often very brutally, in anti-transgender violence and for challenging ideas about what it means to be male or female, or something else.

The theme for this year is "Resilience” – with a focus on creating a space where people of all ages, races, genders, abilities, and classes can come together as a community to remember the victims of anti-transgender violence.