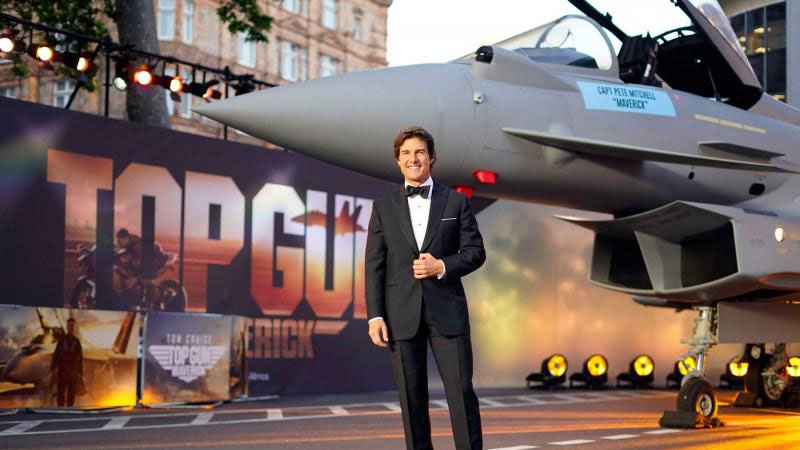 Tom Cruise poses for the media during the 'Top Gun Maverick' UK premiere at a central London cinema, on Thursday, May 19, 2022. (AP)

The decision not to clumsily stereotype a Middle Eastern enemy in yet another movie has less to do with changing geopolitics than it is about the changing nature of the business of Hollywood.

The most famous line from “Top Gun,” the 1986 fighter-jet movie that made Tom Cruise internationally-renowned, was “I feel the need, the need for speed.” And now, 36 years after the world was introduced to Maverick, Iceman and Goose, a nostalgia-fuelled sequel jets into the Cannes Film Festival and then onto our cinema screens.

Some are ecstatic that they can take a nostalgia trip to yesteryear, with excitement running as high as it was for the return of Han Solo to the “Star Wars” universe. For others, it is another example of a Hollywood bereft of new story ideas and resorting to the tried and tested to make a quick buck.

The return of “Top Gun” may jar with some because the original was the quintessential movie of the Reagan years, filled with jingoistic masculine bravado for the Cold War era. The whole point of the film was that the American military was not only fun but a great lifestyle choice and the days of Vietnam were well and truly over.

In the original, Tom Cruise was a young, handsome buck who went to an elite school for fighter jet pilots and bedded his teacher whilst having a macho competition with his contemporaries over who was the fastest and most daring. They were elite pilots, the best of the best and part of an American military machine far superior to anything else the world, especially the Soviets, had to offer. The film did not even need to name the Soviet Union as the enemy. It was clear that underpinning the story was that this was American technology overcoming Russian know-how. It was “Rocky IV” in planes.

The film was so good at imparting American jingoism that the Navy set up booths in movie theatres aiming to recruit cinema-goers as they exited the movie. And it worked. Recruitment skyrocketed. Soon after “Top Gun’s” release, everyone was happy. The tills at the box office rung like crazy, and then the Cold War ended. It was America triumphant when Hollywood was having a boom period. It was so exhilarating that my teenage self went out to buy a pair of aviators.

The sequel’s arrival also tells us a lot about current world politics and the state of Hollywood. The film’s unnamed enemy this time is clearly Iran, something a little concerning, especially for audiences in the Middle East who have watched in horror at how Hollywood has treated characters from the region and the Muslim world as a whole over the decades.

“Top Gun: Maverick” sees a seemingly never-aging Tom Cruise returning to the flight academy to teach graduates how to fly jets to attack the site of a Uranium enrichment plant. And you do not need the twang of some of the American accents in the film that make Uranium sound like Iranian to know that this is a plot inspired by America’s fractured relationship with Tehran.

The “Top Gun: Maverick” pilots are up against an enemy about whom not much is known. And while the details suggest it is Iran, the fact that we never see the colour of the enemy’s face and that the valley they have to attack could be countryside anywhere suggests that it could be anywhere or nowhere.

And what a fine decision that is from the filmmakers. They could not have foreseen the pandemic that forced the delay in the release of “Top Gun: Maverick” by almost two years, but the film now comes at a time when all the focus in America is back on the Russian enemy.

But the decision not to clumsily stereotype a Middle Eastern enemy in yet another movie has less to do with changing geopolitics than it is about the changing nature of the business of Hollywood. When “Top Gun” came out, the North American box office was the largest in the world. Films would regularly make more money in US cinemas than they would in the rest of the world. That has changed in the past decade. Suddenly, the box office is in the Middle East and Asia matters in ways it did not in the ‘80s.

Now film studios have to be conscious of the box office in countries around the world, just as new streaming platforms are savvy about not offending the sensibilities of potential subscribers. Me Too and the Black Lives Matter movements have also, at the same time, highlighted the poor treatment of minorities and women on screen. In addition to the refusal to denigrate peoples, a big difference in the “Top Gun” movies is how the relationship dynamic between Cruise and his love interest has changed. Tom Cruise has taken advantage of the globalisation of the movie business more than any other star. His “Mission Impossible” movies have been particularly adept at using locations such as the Burj Khalifa in ways old Hollywood would use the Empire State Building.

Thankfully, blockbusters have to be less racist, less misogynistic and less smothered in American jingoism to succeed globally.

What is remarkable about “Top Gun” is how it balances all these political facets while staying true to the spirit of the original but still creating fantastic flight scenes. While the idea may not be new or the film particularly great, this “Top Gun” movie is the first modern-day blockbuster in the age of Me Too and Black Lives Matter. And for that, a lot of people will be thankful.