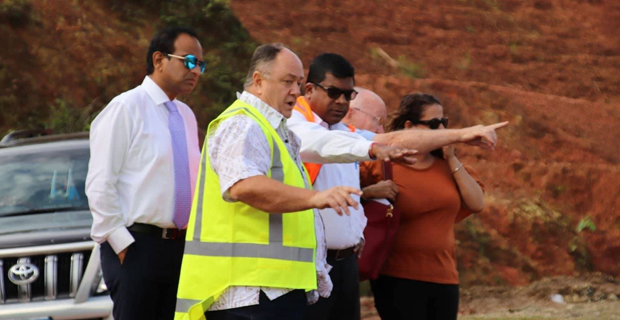 Minister for Environment, Dr. Mahendra Reddy has tasked his senior management team to come up with a landfill operations concept that is technology sound and futuristic for the Naboro Landfill.

This is after Dr. Reddy visited the Naboro Waste Management Landfill and noted that tonnage landing in the landfill has increased nearly ten‑fold since its inception.

Reddy says the concept should be one that would if not totally eliminate but slow down and reduce the extension of newer pits.

The Minister was accompanied by his senior team of officials including the Permanent Secretary, Joshua Wycliffe and the Director for Environment, Sandeep Singh.

Government spends over $3 million every year in operating the nation’s only landfill that commenced its operations in 2005.

Reddy says the Ministry will have to take a futuristic approach towards the operations of the landfill and they cannot keep on building additional pits and cells for everlasting times.

The Director for Environment, Sandeep Singh has assured that a well‑researched concept paper including financial sources to be tapped internationally would be prepared as a way forward before an implementation plan can be drawn in consultation and agreement with the Minister.

Singh says to deal with the overall issue of waste management there must be consistent efforts on awareness and a definitive change in waste disposal behavior.

Based on extensive consultations with relevant stakeholders a Community Levy is being paid as agreed with the I Taukei Affairs Board into a Trust Fund benefitting the ancestral landowners of the Mataqali Bativudi in the Province of Rewa that own the land on which the Naboro landfill is situated.

Since the opening of the landfill in 2005, the Department of Environment has paid over $715,000 in royalties to Yavusa Bativudi.

In the interim, the government through the Ministry of Waterways and Environment is spending a further $5.2 million for the expansion‑construction of the Naboro landfill under the 2019/2020 National Budget.

Work for this project has commenced and is expected to be completed in the next 56 weeks.