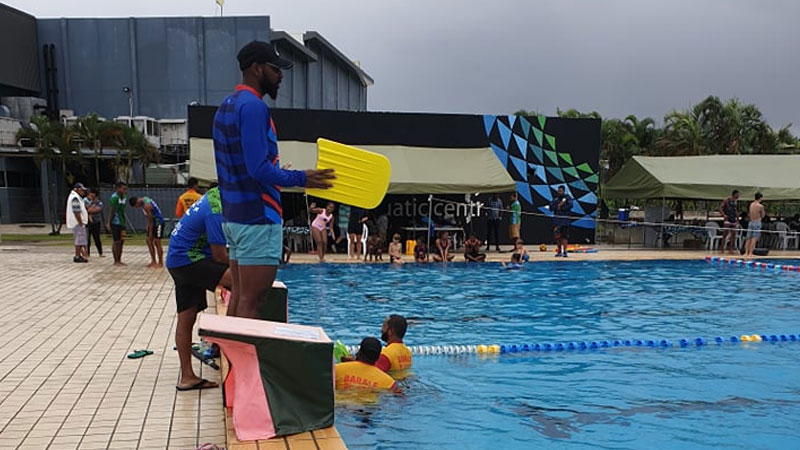 Herbert Rabua, one of the instructors at the Aquatic Centre conducting this awareness programme.

Domonatani says the purpose of this event is to create awareness on drowning cases.

He says preparations for this event began 2 weeks ago with the four swimming clubs as they share the same aim around water safety.

Domonatani says the best time to have a programme like this is during the holidays because families go for picnics to their villages and the beach.

He says they are planning to have a similar water safety programme in December.

Swimming instructor for Tritons, Noelangi Rabua says they are teaching basics in the programme and it has three stations.

Rabua says it is sad that there have been 10 drowning cases in the past three weeks.

She urges children to inform parents or guardians about their whereabouts.

Head Coach of Orca, Esther Malani says this programme is set up in such a way so that it is educational yet fun because children are taking part.

Malani says ORCA is specific on taking people who know how to swim, however, due to the number of drowning cases, they are planning to take in beginners for swimming as well.

She says the children are being guided by swimming coaches and instructors in the programme.

Swimmer and swimming instructor of Dolphin swim club, Herbert Rabua says they are teaching children how to float, survival backstroke and ways to swim against the current from side to side.

He says the participants were aged between 5 to 18 years.