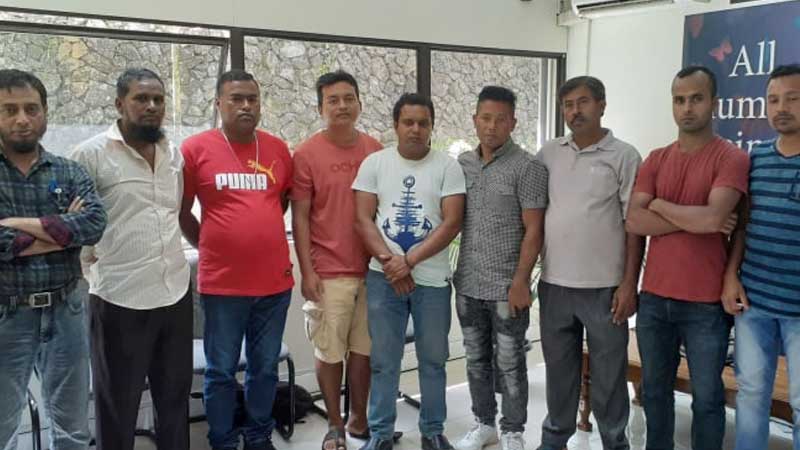 The Bangladeshi nationals that are working for a local company. [image: Supplied]

Some Bangladeshi nationals working for a local company are claiming that the company is not releasing their passports to them, they are allegedly being underpaid and the company is allegedly not giving them time to pray on Fridays as they are Muslim however the company says that all these allegations are false.

The Fiji Human Rights and Anti Discrimination Commission says they were earlier informed by the company that the passports will be returned however they will be writing to the company in relation to these fresh grievances. Commission Director, Ashwin Raj says they have notified the Department of Immigration, the Anti-trafficking Unit of the Fiji Police Force and Ministry of Employment.

These workers say they have filed a police complaint against the company.

They claim the matter was earlier raised and the company had returned about 10 passports but they have yet to return the remaining 38 passports.

According to the Crimes Act 2009, confiscation of any person’s travel or identity documents is an offence.

A worker claims the company is also paying them $160 to $190 a week however, their contracts state they were to receive $250 for 48 hours of work.

The worker is also claiming that the company does not give them time for their Friday prayers and only 2 or 3 staff who slaughter chickens are given time for their prayers.

He says that if the company is unable to give them 48 hours of work per week and normal pay, then the company should release them from their contract and allow them to work somewhere else.

They say that the company should also return $13,000 to each of the workers that they had allegedly paid for all their expenses such as visa lodgement and accommodation.

They say each employee is aware that the passports are released immediately upon request and the company does not have any other travel documents of the employees.

The lawyers also say because the employees are not based at the same location, due process is followed to ensure that the employees receive their passport in a secure manner.

The company also says that they were compelled to reduce wages as they have suffered adversely due to COVID-19.

They say the hotel industry has been a major purchaser of their products and it is a known fact that many tourism hotels, resorts and accommodation operators have either closed for business or reduced their operations and the lack of reduction in purchases has directly affected their revenue.

They say it became necessary for them to evaluate and implement measures to economically sustain itself which it did by reducing wages as opposed to terminating the contracts of the workers.

The company says the wage reduction was only imposed after March 2020 when Fiji’s borders closed.

They say the wage reduction is only temporary and the employees have been advised that wages would be normalised once the economic situation improves.

They further say that the employees may return to Bangladesh at their own cost if they wish to but the company cannot repatriate them at its own cost before completion of the employees contract and work permit period and the employees had agreed to these terms in their employment contract.

The company also says that they did not take any money from the employees as part of the recruitment process and they are unaware of the $13,000 refund requirement.

They have also highlighted that the company has not denied any of the employees time to pray and they engage in prayers during their lunch breaks to ensure that the operational activities of the company are not adversely affected.

Meanwhile, police have confirmed that a report was lodged against the company on the alleged ill-treatment of foreign nationals.