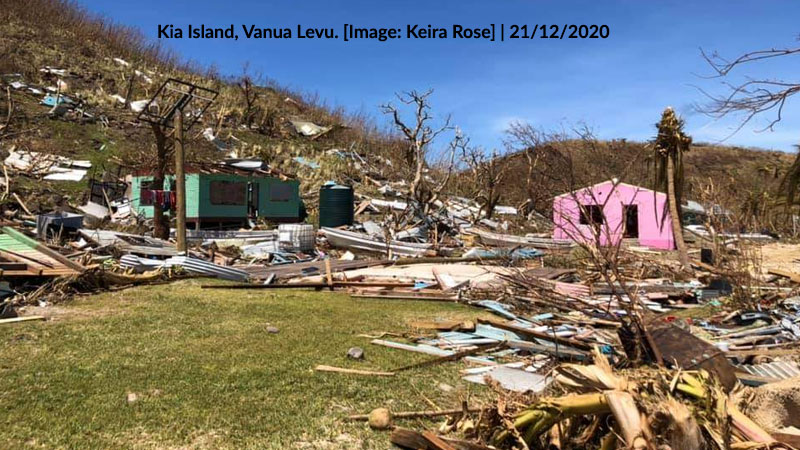 Kia Island in Macuata has suffered extensive damage and some people on the island say Monster Cyclone Yasa has left the island looking like a warzone and the residents have lost everything.

Nukubati residents, Keira Rose and Lara Bourke who visited the island with their group of volunteers from Nukubati say there are 45 houses in Yaro Village however only 2 are left standing after TC Yasa.

Rose says it is just heartbreaking hearing the stories of what the villagers had to endure in Yaro Village.

People had to hide and find shelter wherever they could as the hurricane-force winds and coastal flooding associated with Yasa wreaked havoc on the island.

The villagers say the winds were so destructive and the water was so high, the houses had no chance.

Kaliova Masau from Yaro says they experienced destructive winds and heavy rain for about 10 hours.

Masau says with all the devastation that TC Yasa brought with it, they are still thankful that no lives were lost.

He says they ran from one house to another as the winds damaged the houses from the south end of the village and to the rest.

Masau says some families were inside their homes when the houses were blown away.

He says they had to put the children in cupboards to keep them safe.

They have no communication links to relay information on what they are going through.

Bourke and her team took some food supplies and clean water to Kia Island over the weekend.

The National Disaster Management Office confirms that Kia Island has been severely affected by Cyclone Yasa.

The NDMO says they have delivered the first round of food ration packs, water, tents and hygiene kits on the island.

You can check out the photos and videos from Kia Island on our website, fijivillage

[Videos and Photos by Keira Rose and Lara Meliki]