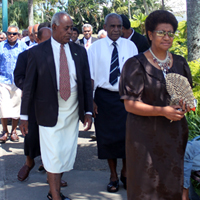 Ro Teimumu led a delegation to present their submission on the draft constitution at the Attorney General’s office.

The vanua of Rewa’s submission was addressed to the Permanent Secretary for the Prime Minister’s office.

There are 13 points that the vanua has rejected under the draft constitution.

In their submission, the Vanua of Rewa has stated that there should not be any immunity under the draft constitution as it will encourage the continuation of the coup culture.

They also said that there is no guarantee of independence of the judiciary with the Chief Justice to be appointed on the advice of the Prime Minister.

The submission signed by Ro Teimumu and the eight chiefs of Rewa said there is no transparency in the process adopted by the government for public consultation on the draft constitution which should rightfully be the responsibility of an independent body.

It also said that the draft constitution fails to acknowledge the important place in Fiji’s history of the i-Taukei distinctly as the first settlers ahead of other ethnic groups who followed later and now call Fiji home.

They also oppose the termination of the Great Council of Chiefs.

He said they were told to take their submission to the Solicitor General’s Office.

Commodore Bainimarama told Fijivillage that the submission will be assessed and a decision will be made on whether anything would be included in the draft constitution.

A man in his 30s from Tau Village, Nadroga has passed away following an accident after 9 last night. Police say the victim was driving the vehicle ... 56 minutes ago
LATEST NEWS

A Suva businessman is currently being questioned by police for allegedly attempting to rape his staff. The man is in his 60s. The woman who is ... 5 minutes ago