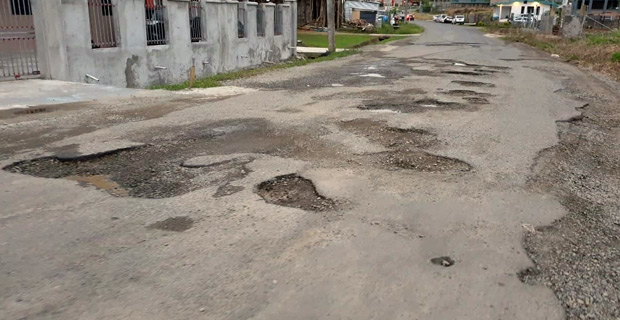 Hundreds of residents living on Naivorovoro Road in Nakasi and those who frequently use this as a bypass are calling on the Housing Authority to fix the road.

Naivorovoro Road is just past Rups Mega Complex in Nakasi which leads to the new subdivision.

A resident, Prakesh Bhan has toldFijivillage that Naivorovoro Road is full of large potholes which pose a threat to both motorists and pedestrians alike. He says they have been asking Housing Authority to fix the road since December last year.

Bhan says he has witnessed drivers swerving into the oncoming lane to avoid these potholes for months, and there has also been serious damage to vehicles.

He says this action puts the lives of those walking along the road especially children, in danger.

Bhan says more than 150 families live in the area, and more houses are being built.

When questioned by Fijivillage, Housing Authority Chairman Nesbitt Hazelman says repair works were supposed to start last week but were delayed due to the adverse weather conditions.

He says the work has been awarded to a contractor who will start temporary repair works soon.

Hazelman adds as soon as the contractor has acquired all the materials needed to repair the road, permanent repair works will begin.

Hazelman further says the road was built for residents but when the main road was being built traffic was diverted to the road and trucks used it as a bypass.

He says they are not blaming anybody but are fixing it.