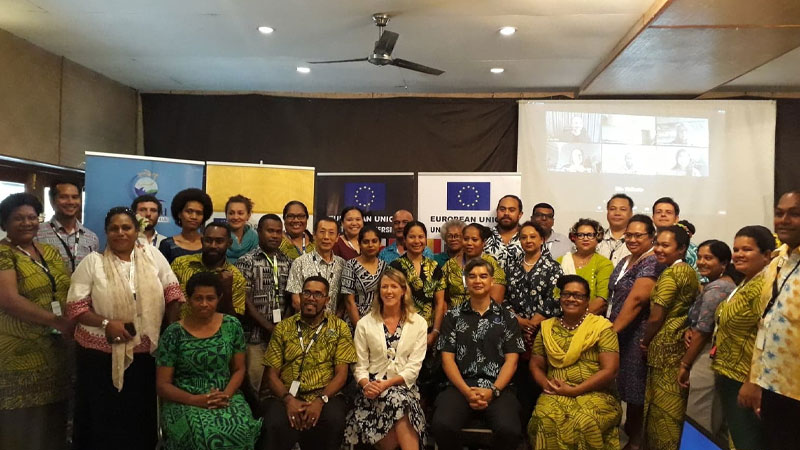 Representatives of the various organisations with partners and donors of the project.

A climate change project has been launched today which focuses on assisting people who have to relocate from their villages due to climate change.

The EU has invested nearly $1.5 million in the project.

While speaking during the launch of the project Strengthening the roles of Civil Society - Climate Change and JustPeace Communities in Fiji, EU Ambassador, Sujiro Seam says the countries and the people of this region stand at the front line of climate change.

Through this project, they hope to enable an inclusive environment of building JustPeace communities as well as providing the necessary counselling and emotional support for these people.

The project is led by Conciliation Resources, Transcend Oceania and TODA Peace Institute and is being funded by the EU and the New Zealand government’s Ministry of Foreign Affairs and Trade.

Executive Director of Transcend Oceania, Adi Vasulevu says Vunidogoloa in Cakaudrove is a clear example of the major impact climate change has on Fiji.

She says the people of the community had to relocate due to their houses being washed away from excessive flooding from the near-by river and sea.

The Turaga-ni-Koro of Vunidogoloa says that even though they had moved to a safer location, they still feel like foreigners in their own land because they left the place their ancestors had built.

Vasulevu says Vunidogoloa is the first of many successful relocations of the project.

Although they are secured in terms of human security, she says on the other hand psychologically and emotionally the villagers are still trying to find their peace.

Religious liberty, as recognized in the Bill of Rights is a founding principle of our Fijian Constitution and as a secular state, we as Fijians are ... 4 minutes ago