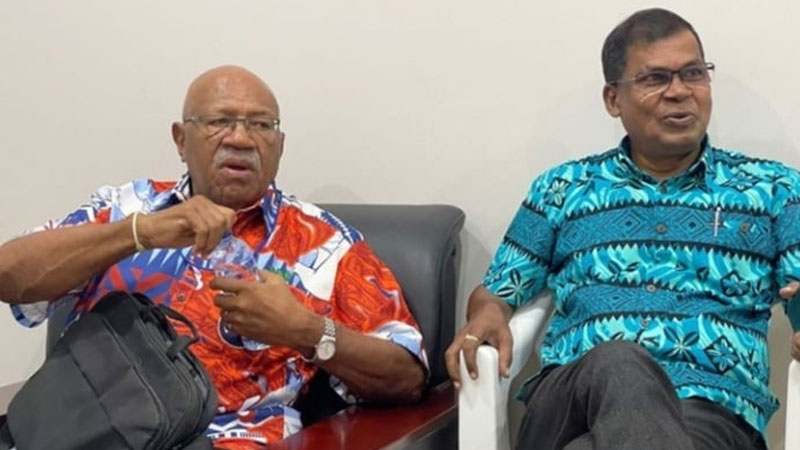 The People’s Alliance Party and the National Federation Party have a pre-election working arrangement and a post-election plan which is still work in progress.

This has been confirmed as People’s Alliance Leader, Sitiveni Rabuka will speak at the NFP Convention this weekend while NFP President, Pio Tikoduadua and Leader, Professor Biman Prasad attended the PAP’s Special People’s Assembly in Nausori today.

When asked by fijivillage, Rabuka says they have had association and coalition talks with the NFP and Unity Fiji.

Rabuka says for several months the People’s Alliance has been engaged in discussions with the NFP about working together.

He says before those talks, he had worked with the NFP all through his life as a politician and national leader.

Rabuka says in the 1999 general elections both the SVT and NFP, jointly lost the elections and Mahendra Chaudhry was appointed Prime Minister in May 1999.

He says when he left Government House after conceding defeat, he said to the media that Fiji had a Constitution worth losing an election for.

Rabuka says they have an understanding with the NFP to continue their bipartisan efforts for Fiji, and this will be seen more and more together as they traverse the islands and roads of the land. He says they will spread a message of peace, stability, prosperity and respect for human rights, fundamental freedoms and the respect for the rule of law.

When asked on the People’s Alliance Party and NFP arrangement, NFP Leader, Professor Prasad says they are likely to have even joint campaigns going into the elections.

Professor Prasad says the NFP Working Committee authorised the party leadership to engage with political parties to ensure they advance national interests at all levels.

He says the NFP has worked with Rabuka and the former SVT on the 1997 Constitution, and they continued working with him when he was the Opposition Leader.

He says talks on the post-election working arrangement between the two parties will continue.

A man guilty of raping his stepdaughter will be sentenced by Justice Daniel Goundar today. He was found guilty of two counts of rape. It was ... 32 minutes ago