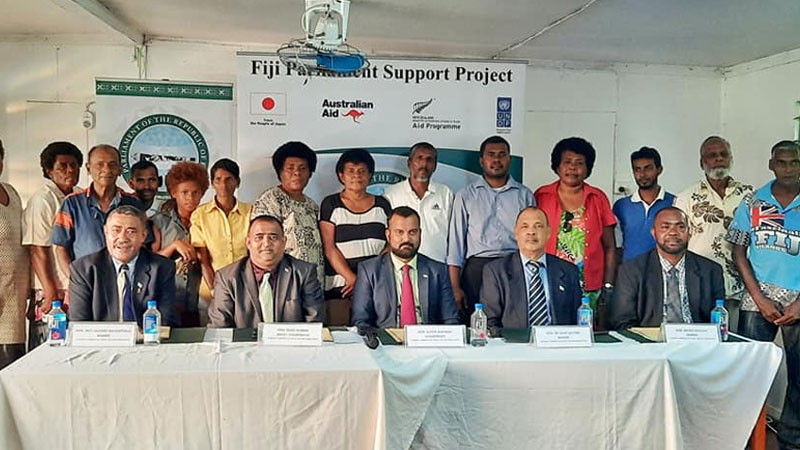 Consultations at Valebasoga Secondary School in Labasa yesterday. [Image: Parliament of the Republic of Fiji]

The Chairman of the Parliamentary Standing Committee on Justice, Law and Human Rights Alvick Maharaj says that while going into communities for consultations on three Electoral Bills, the Committee has been accused of showing their faces only because the general election is near.

While speaking during consultations at Valebasoga Secondary School in Labasa yesterday, Maharaj says they are there to get views of the people and not to campaign.

He says they are not politicians at the moment but are members of a parliamentary committee.

He is urging people to come in numbers so that they can have this kind of discussion and adds that voting is very important and no body should be making their votes invalid and unaccounted for.

All students will progress to the next level in the next academic year which will have four school terms. Minister for Education Premila Kumar says... 11 hours ago
LATEST NEWS

The Ministry of Health and Medical Services confirms the COVID-19 vaccination programme for children has been deferred to Monday 4th October 2021 to ... 10 hours ago

The United States of America, through USAID has partnered with SPC to launch a new activity called Promoting Just, Engaged, Civic-minded and ... 10 hours ago

The Education Ministry says as of 24th September, 4,669 staff of the Ministry are now fully vaccinated while 8,524 staff have received their first ... 11 hours ago

Pastor Rajesh Goundar of El-Shaddai Assemblies Of God Church in Wairabetia, Lautoka is seeking forgiveness from those who have been hurt by his ... 11 hours ago

Prime Minister, Voreqe Bainimarama has confirmed with 70 percent of adults now fully vaccinated in Fiji, the curfew hours will be 10pm to 4am from ... 11 hours ago
More News
TOP