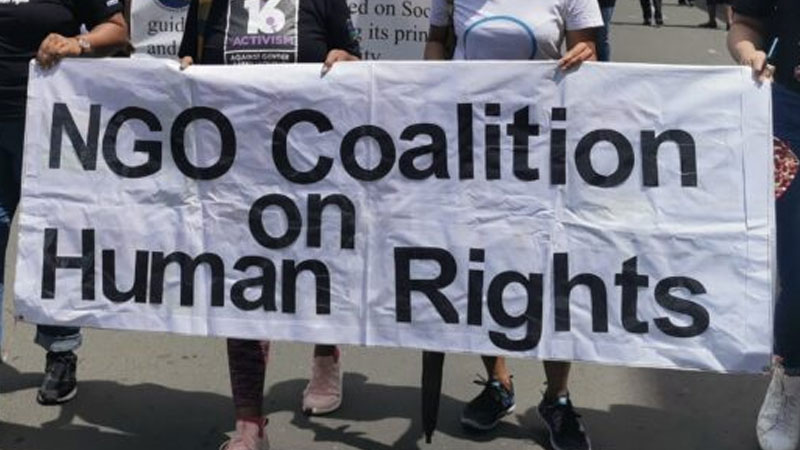 The NGO Coalition on Human Rights says this is not the time to rush and pass a Draft Police Bill that gives the Police more powers over individuals when cases of police brutality have yet to be investigated.

A statement released by the coalition says they have repeatedly called for urgent reviews of the investigation processes to be transparent and timely so that justice is upheld.

They ask where in the proposed bill are their concerns addressed and articulated.

The NGO Coalition also says they strongly condemn the blatant disregard of due process by the Government and the audacity to attempt, by assigning the Ministry of Defence and National Security to oversee the Draft Police Bill 2020.

The coalition says any proposed legislation must pass through the parliamentary standing committee.

It says it is not the mandate of the Ministry of Defence and National Security to manage the consultation process nor make amendments to a bill.

The NGOs say their handling of this particular draft bill, a bill which is of utmost importance to the freedom and safety of all Fijians, raises serious ethical concerns.

The coalition says a working democracy must protect and ensure good governance, accountability, transparency and due process at all levels, and even more so when passing laws that will infringe on the fundamental rights and freedoms of every Fijian in this country if passed into law by Parliament.

They say Fiji is facing serious cases of human rights violations where the Police have used excessive force during arrests on individuals.

The coalition says according to data from the Office of the Director of Public Prosecutions, from May 2015 to April 2020, there were 400 police officers who were charged with serious violence offences - this included 16 charges of Rape, 2 charges of Murder and 9 charges of Manslaughter.

They further say they wonder whether the input of every Fijian to this Draft Police Bill would even matter or make a difference at all.

The coalition says if the government is serious about its international human rights commitments and priorities, then it should not rush this process and genuinely ensure the meaningful engagement of all Fijians and human rights organisations where their concerns are addressed clearly and articulated in the Draft Police Bill 2020.

Minister for Policing Inia Seruiratu has said that the public consultation phase is extremely important because they need to adequately capture and take into consideration the interests, concerns and voices of every Fijian.

He said the review of the Fiji Police Force’s primary legislation is part of government’s priorities to be tabled in parliament this year.

Seruiratu said initially, the review process of the Police Act 1965 began in 2019 with an in-house and inter-agency consultation programme where submissions were received from all the five divisional police commanders, directors and inter-agency partners.

Seruiratu says he will not comment on the draft bill at this stage.