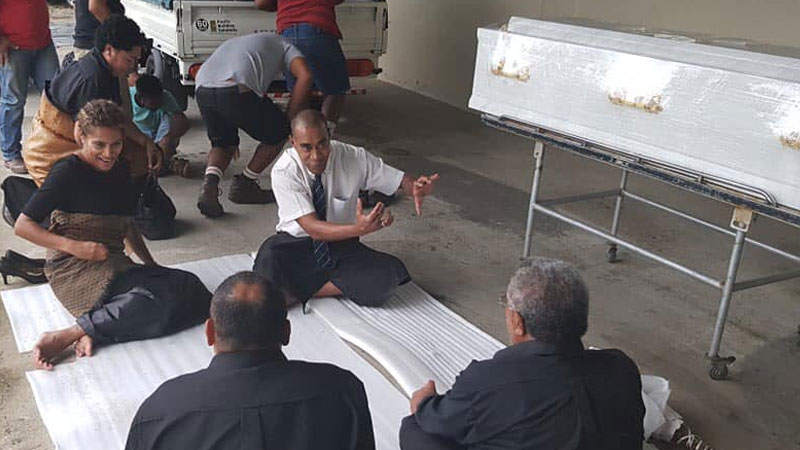 Lynda Tabuya, with family members of the late Laisenia Qarase, beside the custom made casket that was donated. [image: Young SODELPA]

Opposition Whip and President of SODELPA Nasinu, Lynda Tabuya has donated a custom made casket for the late former Prime Minister, Laisenia Qarase.

The casket has Qarase’s name imprinted on it with the bible verse, Psalm 73:24, “You guide me with your counsel, and afterwards, you will take me into glory”.

Koroi says the former Prime Minister’s body will leave the Suva Private Hospital mortuary at 7am tomorrow. There will be a stopover at his residence at Moti Street before leaving for Nausori Airport.

The body is expected to leave for Vanuabalavu at 8.30am tomorrow.

The service will start at 10am tomorrow.

He passed away last Tuesday after a short illness. He was 79.

He is survived by his wife, Mrs. Leba Qarase, seven children, 27 grandchildren and three great-grandchildren

A man who is alleged to be the received stolen items is now in police custody. Officers from the Police Southern Division Taskforce managed to ... 19 minutes ago

The grandfather of the 13-year-old girl who was murdered in Namara, Labasa last month is pleading with the public to come forward if they have any ... 45 minutes ago