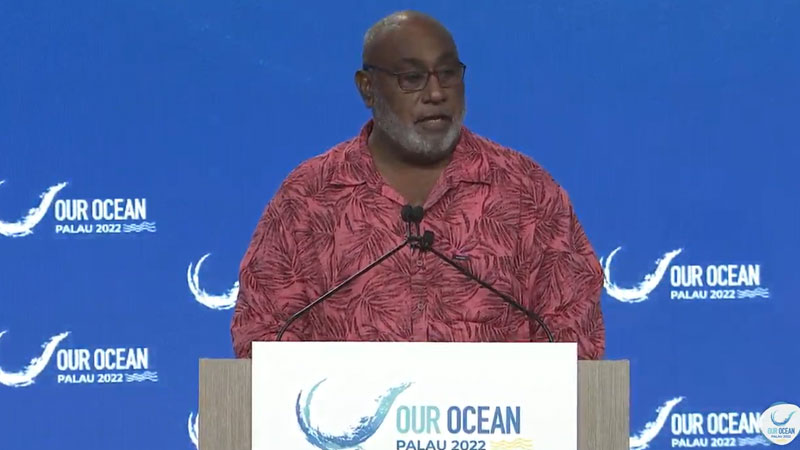 Minister for Fisheries Semi Koroilavesau says Fiji is using our reopening to the world as a reset for a highly sustainable and resilient tourism sector.

While speaking on behalf of Attorney General Aiyaz Sayed-Khaiyum at the Our Ocean Conference in Palau, Koroilavesau says they never doubted that our tourism brand would keep its value and our industry would bounce back.

He says visitors to Fiji should come to see our reefs, forests and the beautiful biodiversity and the money they spend in Fiji should help protect these ecosystems.

Koroilavesau adds the onus is on us to ensure that the oceans are protected not only for tourism and economic benefits but for their value as a critical component of our global ecosystem.

Koroilavesau says Fiji’s entire development agenda is built around the principle of sustainability.

He further says sustainability for Fiji means solidarity from the rest of the world and he hopes Fiji’s example can inspire others.

Koroilavesau also says Fiji’s position is that as part of our commitment to sustainably manage the ocean, deep sea bed mining should be banned in this decade in favour of exploration.

Sayed-Khaiyum was scheduled to speak at 5.20pm yesterday however Koroilavesau gave the speech in Palau on behalf of the Attorney General.

No reason was given on why Sayed-Khaiyum did not speak.

It was earlier confirmed that a Fijian delegation led by Attorney General and Minister responsible for Climate Change, Aiyaz Sayed-Khaiyum will be heading to Palau last Saturday to take part in the Our Ocean Conference.

The Fijian delegation transited through Brisbane.

The Acting Head of the Climate Change and International Corporation Division, Kushaal Raj said Fiji will be part of discussions as to how we can achieve marine conservation, rectify marine pollution issues, waste management, sustainable tourism as well as the blue economy.

He said Sayed-Khaiyum will also be part of bilateral meetings.

The trip is supported by the Australian Government.

The Conference will be a key moment for countries, civil society, and industry to commit to concrete and significant actions to protect the ocean.

The Conference which is being co-hosted by the US Government, began earlier today.