Kishore Kumar is not employed by the FijiFirst – Sayed-Khaiyum

I’m the head of admin for FijiFirst Party, not the ruling FijiFirst - Kumar

Kishore Kumar is not employed by the FijiFirst – Sayed-Khaiyum

I’m the head of admin for FijiFirst Party, not the ruling FijiFirst - Kumar 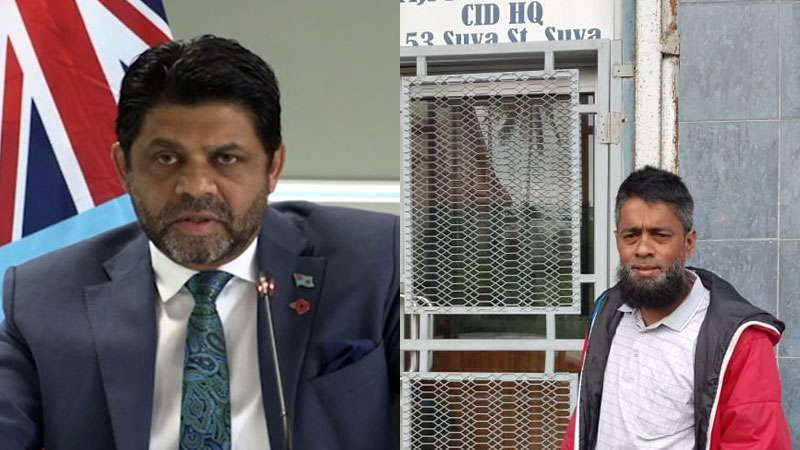 FijiFirst General Secretary, Aiyaz Sayed-Khaiyum says Kishore Kumar who is currently under investigation by Police and the Ministry of Education, is not employed by the FijiFirst.

The National Federation Party had released a video earlier this week on their Facebook page from September 2017, where Kumar is shown attending a NFP Rally in Valelevu. In that video, Kumar had claimed that he was the leader of the investigative research intelligence network on social media and he had also claimed that he was the head admin of the FijiFirst Party on social media.

Speaking outside the CID Headquarters this afternoon, Kumar said that he is the head of admin for the FijiFirst Party which is not related to the ruling FijiFirst.

NFP had released the 2017 rally video after rubbishing Kumar’s claims to Legend FM News that he had done work for the NFP.

Sayed-Khaiyum also said today that Kishore Kumar is not doing any social media work for the FijiFirst.

Sayed-Khaiyum says it is obvious Kumar is a free agent when you look at the comments he has been making on his social media page.

When asked by Fijivillage on how Kumar continued to make political comments on social media for quite some time when he is a civil servant and is bound by the Code of Conduct, Sayed-Khaiyum says they do not have a person tracking civil servants’ comments and posts.

He also says we should not have a trial by media.

He says there is a fine line between being racist, defamatory, slanderous or making factually incorrect comments and there is a lot of fake news on social media. Sayed-Khaiyum says unfortunately some of the media have started relying on comments being made on social media and taking it as the gospel truth and asking the government questions based on that. He says they will not respond to that at all.

The Attorney General says a good media organisation is not going to use social media, in particular comments or opinions by individuals as a source of information that has questions of integrity and credibility.

Kishore Kumar has been released from Police custody this afternoon as he can only be held in custody without charge for 48 hours. Police say there are other aspects of the investigation that need to be finalised before he is taken into custody again.