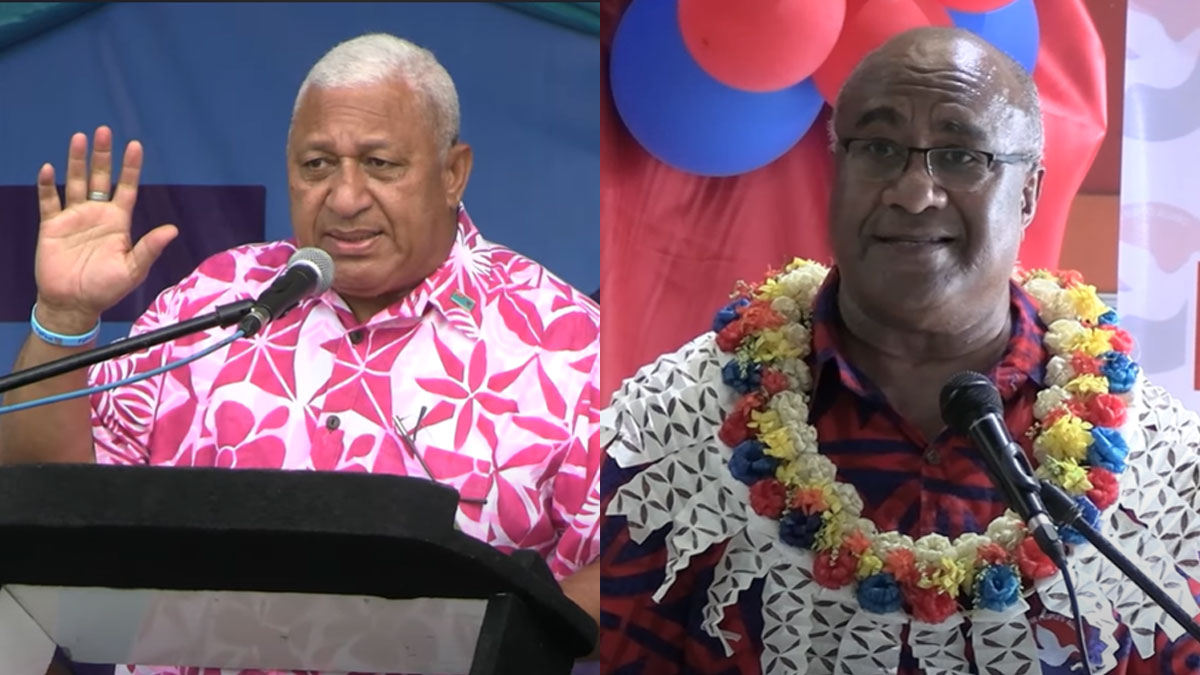 FijiFirst Leader, Voreqe Bainimarama says the Deputy Leader of People’s Alliance, Manoa Kamikamica should look at what is happening beyond Fiji’s borders when he claimed in their rally that Bainimarama and Aiyaz Sayed-Khaiyum are the cause of the increase in prices in the country.

However, Kamikamica says this Government will cherry-pick what they say against them, and they are getting desperate and tired because they cannot handle the truth.

While speaking at the FijiFirst rally at Syria Park in Nausori, Bainimarama says this shows that the lies are starting to grow with election day drawing near.

He says the price rise is because of COVID-19 and the Russia and Ukraine war.

Bainimarama says the transportation cost of goods and services from overseas is now ten times what it used to be before.

He adds there is too much misinformation brought by the opposition to change the mindset of the people, and he told Kamikamica to look at what is happening beyond our borders.

The FijiFirst Leader also says that we should remove racial discrimination, which he was speaking about yesterday on Facebook, and he claims this post is being done by the opponents from Australia and supported by those that are here in Fiji.

Responding to Bainimarama, Kamikamica says the FijiFirst Leader conveniently did not address his $3,000 travel allowance that was highlighted in Lami and it might be great for him to disclose to the people of Fiji how many days he spent out of Fiji per annum since he came into office in 2014 before the COVID-19 pandemic.

He says that way, the people can see how much the Prime Minister has collected in allowances at the expense of the Fijian people.

The Deputy Leader of the People’s Alliance says Bainimarama suggested that he was lying when he said that Fijians are experiencing high prices with this FijiFirst Government and Bainimarama stated the high prices were driven by the COVID-19 and the Russian/Ukraine crisis.

He says, unfortunately, the Prime Minister has not been well briefed by his money man to understand where they are coming from.

Kamikamica says the wastage by this Government has been identified as high as $500 million per annum by some experts and in his speech, in Lami, he quoted their partner and colleague, Professor Biman Prasad who stated that the FijiFirst government had spent $50 billion taxpayers’ money over the last 15 years.

He further says just imagine if Bainimarama’s Minister of Economy had done the right thing and saved just $1 billion over the last 15 years and the response to COVID-19 and the pandemic would have been more robust, and sound, especially in addressing price increases.

He adds if the FijiFirst Leader had been properly advised by his money man, he would have been more decisive in dealing with wastage and those funds could have been used to cushion the current rising prices.

Kamikamica says experts such as Professor Biman Prasad and Savenaca Narube always talk about managing fiscal space in Government and reducing wastage because this discipline was not followed, and Fiji is in a vulnerable position.

He says that is one of the main reasons why he has been stating that the country has been financially mismanaged over the last 16 years and adding to this is the failure of this government to diversify the economy and the truth is plain to see.

He adds that they would like to invite the government to talk about how successful their diversification in Rewa Dairy was because when he was on the Board of Rewa Dairy, milk production was at 11 to 12 million litres.

Kamikamica says currently it is at 4 to 5 million litres.

He says the Government still has not provided a solution to the sugar challenges.

He says the People’s Alliance Party stands ready with 55 candidates from across the public and private sectors to implement their 100-day plan that should kick start the work needed to rebuild Fiji.

The Deputy Leader suggested when they present their manifesto this week in Lautoka, they are inviting Bainimarama to debate with their leader on the future of Fiji and he is inviting the Minister of Economy to also attend the debate on Straight Talk on the 30th of this month to discuss the economy with the other political parties and he will be there.