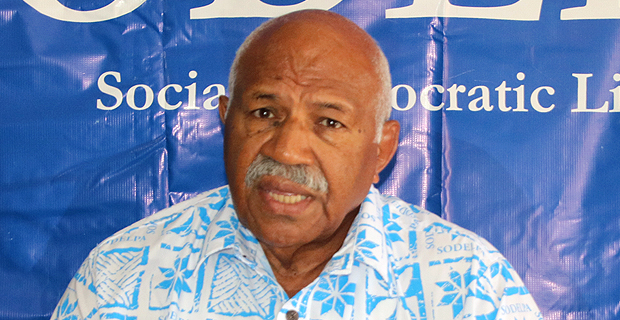 SODELPA Leader Sitiveni Rabuka says that it is unfortunate that Prime Minister Voreqe Bainimarama has chosen to attack him personally in his budget response.

SODELPA Leader, Sitiveni Rabuka says that it is unfortunate that Prime Minister Voreqe Bainimarama has chosen to attack him personally in his budget response, rather than focusing his attention on the contents of the 2018/19 National Budget.

Rabuka was responding to the comment that was made by the Prime Minister, saying that one factor that had an even more devastating effect on the country’s economy than cyclones was Sitiveni Rabuka.

Read: Bainimarama says the most devastating effect on Fiji's economy was caused by Rabuka

He also says that rather than just reading out speeches written by somebody else, Bainimarama should check his figures.

Rabuka also says that Bainimarama has also accused him of lies and falsehood to scare and confuse the public saying that he is making Fiji look foolish and weak.

Rabuka said that the 60 Minutes interview had nothing to do with the budget debate as he was only sharing his personal views on matters of interest to the nation and he adds that how can someone sharing his view be called a liar.

Rabuka raised concern that the Speaker did not stop Bainimarama from making comments as Rabuka was not in the house to defend himself.

He says that a clear sign of double standards was seen when the Speaker ruled that Ashwin Raj's name should not be mentioned in Parliament because he cannot defend himself.

Rabuka says this was after a member of the Opposition during a Parliamentary debate, criticized the Director of Human Rights Commission, Ashwin Raj.

Rabuka adds that the question is why there is a double standard by the Speaker. He also says that unlike Fiji First, SODELPA encourages its members to share their opinion openly so that the differences can be addressed.

He says that he can assure the nation that there is no fighting and disagreement within SODELPA as highlighted by the Prime Minister.

He says that the dictatorship in Fiji First can be witnessed as three of its former members left the party including Doctor Neil Sharma, Timoci Natuva and Pio Tikoduadua.

Rabuka says it is unfortunate that his name was raised in parliament, a place he cannot defend himself as a common citizen.

Meanwhile, the Speaker of Parliament, Dr Jiko Luveni says that the issue raised by the Prime Minister, Voreqe Bainimarama about Rabuka was allowed to be discussed as it was already being reported by the media.

She also says that she could not recall anything about the issue that was raised regarding the Director of Human Rights and Anti Discrimination Commission, Ashwin Raj.

The Permanent Secretary for the Ministry of Waterways and Environment, Mere Lakeba, says the symposium provides an opportunity for people to ... 10 minutes ago

The Minister for Employment, Productivity and Industrial Relation, Agni Deo Singh, says there were hindrances in the past regarding the Employment ... 17 minutes ago

A father and daughter duo, have enrolled for undergraduate studies at The University of the South Pacific. 47-year-old Ratu Soqosoqo says he could ... 20 minutes ago