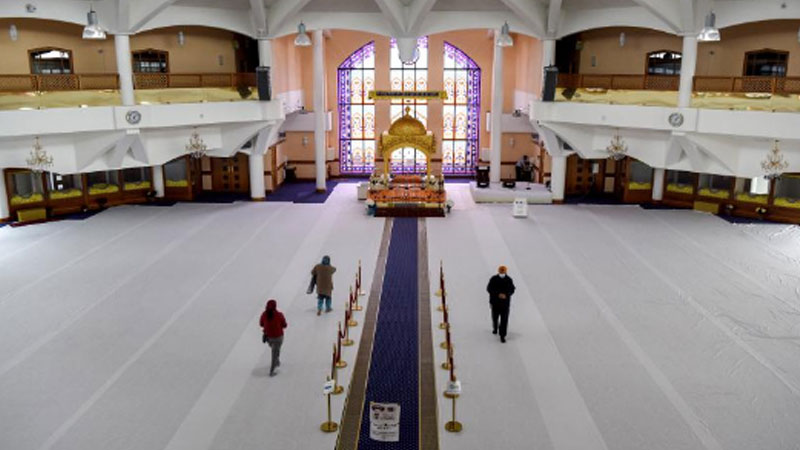 Inside a Sikh temple during a time for private prayer in the Southall district of London, April 29, 2021. [Image: Mary Turner/ The New York Times]

NEW DELHI — His COVID-19 task force didn’t meet for months. His health minister assured the public in March that India had reached the pandemic’s “endgame.” A few weeks before that, Prime Minister Narendra Modi boasted to global leaders that his nation had triumphed over the coronavirus.

Now, a second wave has made India the worst-hit country in the world.

New infections have reached about 400,000 a day. Vaccines are running short. Hospitals are swamped. Lifesaving oxygen is running out. Each day, cremation grounds burn thousands of bodies, sending up never-ending plumes of ash that are turning the skies gray over some of India’s biggest cities.

India’s stark reversal, from declaring victory to suffering its gravest emergency in decades, has forced a national reckoning, with Modi at its center.

Experts around the world once marveled at how the country seemed to have escaped the worst of the pandemic, entertaining explanations about the relative youth and health of the population that Modi and his government embraced, if not encouraged. Even now, Modi’s supporters say that India has been hit by a global phenomenon and that more time is needed to trace the causes of the second wave.

But independent health experts and political analysts say that Modi’s overconfidence and his domineering leadership style bear a huge share of the responsibility. Critics say his administration was determined to cast an image of India as back on track and open for business despite lingering risks. At one point, officials dismissed warnings by scientists that India’s population remained vulnerable and had not achieved “herd immunity,” as some in his administration were suggesting, said people familiar with those conversations.

The growing distress across India has tarnished Modi’s aura of political invulnerability, which he won by steamrolling the opposition and leveraging his personal charisma to become India’s most powerful politician in decades. Opposition leaders are on the attack, and his central hold on power has increasingly made him the target of scathing criticism online.

With parliamentary elections three years away and no signs of defections from his government, Modi’s power seems secure. His government has stepped up efforts to get supplies to desperate patients and broadened eligibility for scarce vaccines to more age groups. Still, analysts say that his dominance means that more people will hold him personally responsible for the sickness and death exploding across the country.