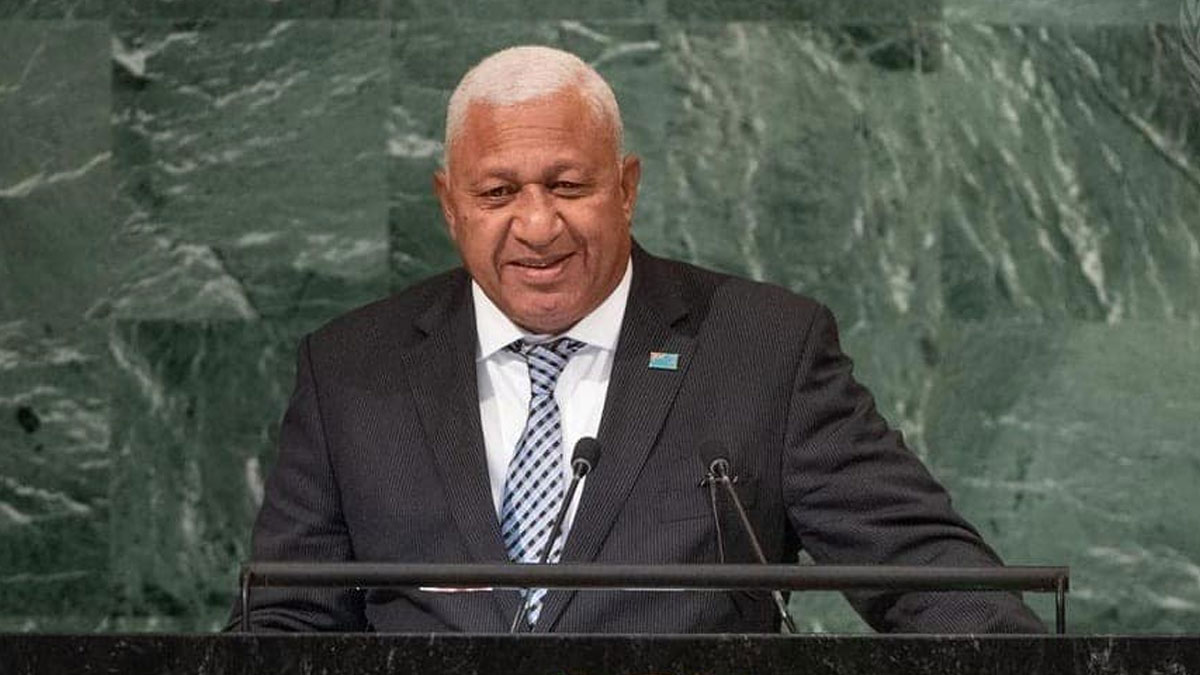 I again urge developed nations to deliver on the $100 billion climate finance commitment at COP27 at Sharm El-Sheikh in Egypt this year, which is now three years overdue.

This was stated by Prime Minister Voreqe Bainimarama while delivering Fiji’s National Statement at the 77th Session of the UN General Assembly.

Bainimarama says he is urging leaders only to come to Sharm El-Sheikh if they are ready to agree to a loss and damage mechanism in addition to a post-2025 financing framework and this must be in the order of $750 billion.

He adds ahead of Glasgow, he told leaders not to bother packing their bags if they did not come with serious carbon slashing commitments.

The Prime Minister says Fiji has adopted a new Constitution that echoed the spirit of the United Nations Charter’s promise to uphold equal rights for all people regardless of background, religion, ethnicity, gender, age, physical ability or province.

Bainimarama says the Constitution guarantees common and equal Fijian identity and citizenship for all citizens, and the Fijians have used that vote to elect his government twice in the last eight years.

He says they have worked to advance the civil, political, and socio-economic constitutional rights of every Fijian, from the protection of indigenous land ownership to the right to clean water and adequate sanitation, the right to a clean and healthy environment, and the right to education, among many more.

The Prime Minister also says their eight year old democracy has delivered the equality their people cherish, it has delivered services and infrastructure they depend on and it certainly has shown its resilience.

Bainimarama says they have built or replaced hundreds of kilometres of water pipelines and improved access to clean water to over 80 percent of all Fijians, since 2014.

He also says thousands of Fijian households have gained access to electric power for the first time, propelling electricity access in the country upwards of 96 percent.

Bainimarama says they have built dozens of bridges and crossings and lit up the country with thousands of new street lights.

He further says for the first time in history, primary and secondary education are free in Fiji, not free in name, but free in fact and accessible to all.

Bainimarama also says they have extended opportunities for tertiary education beyond what was ever thought imaginable and, today, Fijian women outnumber men in our universities.

The Prime Minister also says the COVID-19 pandemic contracted the Fijian economy by over 20 percent, it stole half of the government revenues, flung over 100,000 Fijians out of full-time employment, and pressed them to the precipice of a socio-economic crisis.

Bainimarama also says though Fijian tourism revenue was zero, they paid out income support to the unemployed.

He also says they did not slash a cent of the pensions and payments to elderly and disabled Fijians.

He further says if they do not halve carbon emissions by that critical year, the crisis of our warming planet will imperil every gain Fiji and every nation has made.

The Prime Minister says in a year of challenge, he was there to condemn not one but three great global conflicts, the first of which was Russia’s war of aggression on Ukraine.

He says a scourge that reflects a brutal mentality of conquest and empire.

He also says no matter their size, no matter their might, Fiji is unafraid to condemn any warring nation and they owe nothing less to the Fijian peacekeepers who have sacrificed and paid the ultimate price for peace’s sake around the world.

Bainimarama says in the Pacific, who have lived the horror of nuclear fallout, wholly denounce Vladimir Putin’s threatened use of nuclear weapons.

He says he is appealing to Putin to give diplomacy a chance to bring this war to a speedy close.

The Prime Minister says he too condemns the climate change war as humanity is waging on itself, our ecosystems, and the ocean.

He says this war isn’t fought with bullets and bombs, but with apathy, denial, and a lack of courage to do what we all know must be done.

He also says he condemns the cold war of indifference against the citizens of small islands and states who bear the brunt of this super-storm of global shocks, from rising commodity prices to the climate crisis and the pandemic.

He claims they are not being heard by the leadership of some multilateral development banks.

Bainimarama says as leaders, they have the capacity to defend peace on all these fronts and asks where is the world’s courage to do so.

The Prime Minister says he arrived from the funeral of Her Majesty Queen Elizabeth II, a leader who holds a special place in Fijian history and in the hearts of the Fijians, including his own.

He says his best memory was when the Queen was at a welcome reception she hosted at the Commonwealth Heads of Government Meeting.

He also says this is where she walked over to him from her greeting post to say she personally welcomed him and Fiji back into the Commonwealth.