Heated exchange of words in parliament between AG and Niko Nawaikula

Heated exchange of words in parliament between AG and Niko Nawaikula 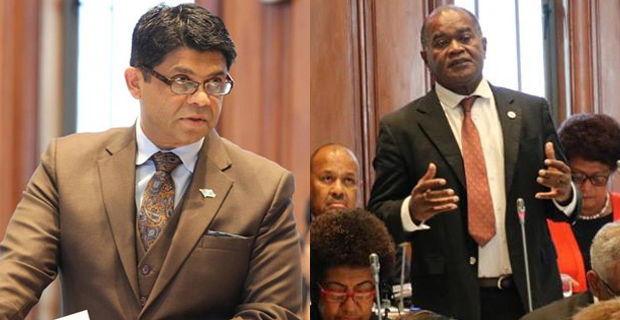 There was heated exchange between SODELPA MP, Niko Nawaikula and Attorney General, Aiyaz Sayed-Khaiyum in the parliamentary debate on the 2018/2019 National Budget after Nawaikula made comments and withdrew them, and then started calling Sayed-Khaiyum young and arrogant.

Nawaikula raised the issue that a number of independent offices are listed under the Department of Justice which come under the Attorney General.

Aiyaz Sayed-Khaiyum then raised the issue that Nawaikula is misleading parliament as the independent offices are not listed under the Department of Justice. It was then verified that Nawaikula had made the comment.

Sayed-Khaiyum said that Nawaikula is notorious in parliament for making comments and saying that he did not do it.

The heated exchange continued which resulted in both saying to each other ‘Let’s have It’.

Speaker, Doctor Jiko Luveni then said she does not want unparliamentary language.

Meanwhile Nawaikula also stresses that when they come into power, they will restore the Great Council of Chiefs and remove the Land Use Act and Surfing Act.

Nawaikula says the gist of the budget is that it is a vote buying budget and he can feel that the government is afraid of Rabuka.

More than 12,000 people have been killed and tens of thousands injured after a magnitude 7.8 earthquake struck Turkey and Syria on Monday, according ... 50 minutes ago