The Fiji National University Students Association has raised concerns about People's Alliance member Lynda Tabuya and has also asked the NFP to talk to its supporters after coordinated cyberbullying efforts currently underway against their President Ketan Lal.

The issue has also brought to the forefront concerns about fake accounts on social media.

A statement by the FNUSA says they will not be silenced and are encouraging every young person who has been a victim of cyberbullying to continue to fight for what they believe, as cyberbullies are nothing but keyboard warriors.

They say what is most disturbing is that People’s Alliance Party member Lynda Tabuya is making derogatory remarks in a personal video that was posted on a fake troll page managed by a fake account.

FNUSA President Ketan Lal says this is surprising and concerning because Tabuya openly claims to fight for the rights of youth and workers yet she can be seen participating in cyberbullying. 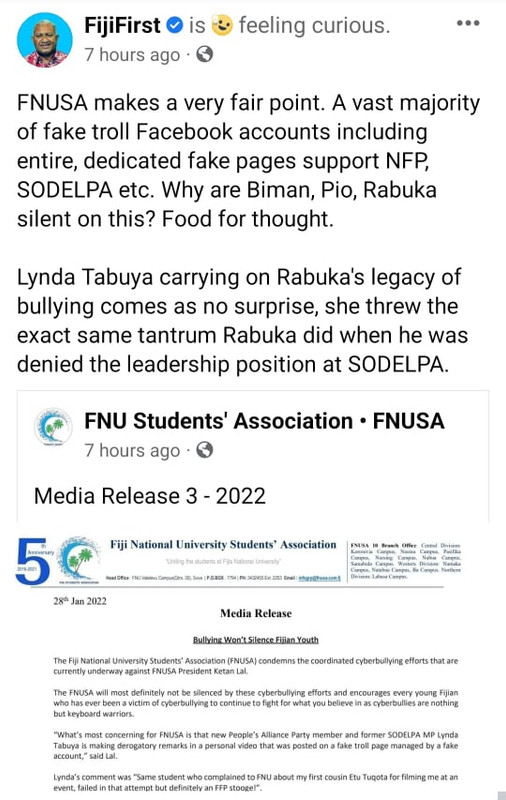 Lal says a true leader defends the rights of all regardless of whether they agree with their beliefs or not.

Tabuya's comment was "Same student who complained to FNU about my first cousin Etu Tuqota for filming me at an event, failed in that attempt but definitely an FFP stooge"

He has questioned whether Tabuya and the People’s Alliance are going to become cyberbullies and attack anyone who has a different belief or viewpoint.

Lal also says they all know that the National Federation Party talks about dialysis machines a lot and right after the Association put out a release, fake accounts that are posting pro-NFP content started to post his online videos. He says they find this very strange.

Lal is questioning NFP Leader Professor Biman Prasad and President Pio Tikoduadua what is going on here and why are these accounts cyberbullying a Fijian youth who is posting opinions as guaranteed by the 2013 Constitution.

Lal then says he is not making any allegations but maybe NFP needs to talk to its supporters.

The FijiFirst Party has shared the FNUSA's statement and says this makes a very fair point.

The Party further says Lynda Tabuya carrying on Rabuka's legacy of bullying comes as no surprise and that she threw the exact same tantrum Rabuka did when he was denied the leadership position at SODELPA.

In response, NFP Leader Professor Biman Prasad says they will be sending a legal notice to the FNU Students Association to identify which pages are NFP fake pages.

Professor Prasad says FNUSA is pretending to represent the interest of the students when they are appearing to be stooges of the FijiFirst Government.

The NFP Leader also says a number of students are disappointed about how this Government has handled the COVID crisis.

Prasad says the Association should stick to raising some of these issues rather than becoming a mouthpiece for the Government.

He also says they want the FijiFirst Party to provide evidence that the NFP runs fake pages.

Prasad says this is a desperate attempt from the FijiFirst government after their tactics on the Fijian Government Facebook page have been exposed.

SODELPA Leader Viliame Gavoka says no one in the SODELPA office is involved in fake news or creating fake pages.

He says they are very careful with their official pages. Gavoka says none of this is coming from SODELPA in any way at all.

People’s Alliance Leader Sitiveni Rabuka says they do not condone cyber-bullying and he is asking FNU Students Association President Ketan Lal to file a police complaint against Lynda Tabuya if he feels she has broken the laws of this country.

He says the comment by Tabuya is not an official party statement.

When asked if the party will take action or speak to Lynda Tabuya, Rabuka says every party member is an individual person and Tabuya will be answerable for her statements.

Rabuka says he also does not support any idea of people having fake pages.

Fijivillage has reached out to Tabuya for a response to the statement by Lal.

She is yet to respond.

A man in his 30s from Tau Village, Nadroga has passed away following an accident after 9 last night. Police say the victim was driving the vehicle ... 32 minutes ago
LATEST NEWS