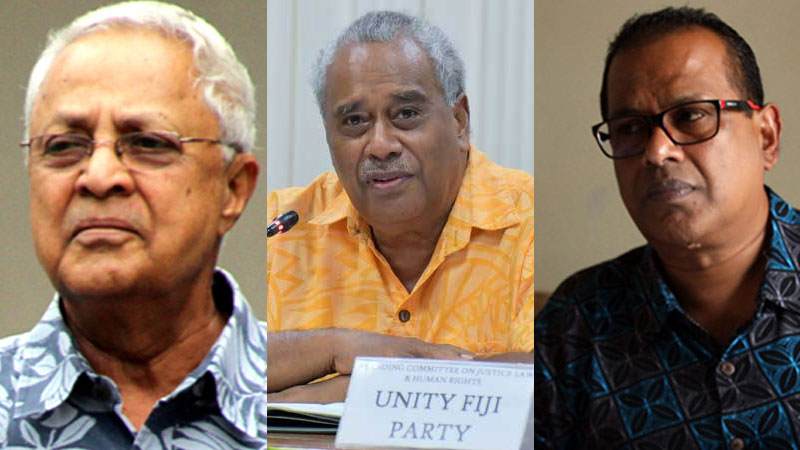 The Fiji Independent Commission Against Corruption (FICAC) has concluded that the allegations made by Fiji Labour Party Leader, Mahendra Chaudhry and Unity Fiji Leader, Savenaca Narube against the former Electoral Commission Chairman, Suresh Chandra and the Supervisor of Elections, Mohammed Saneem were baseless and without any merit.

FICAC says Chaudhry and Narube did not provide any cogent evidence to support their allegations during the investigations but simply relied upon hearsay information provided by unnamed sources.

The complaint was filed by Chaudhry, Narube and the Leader of Freedom Alliance, Jagath Karunaratne.

Upon receipt of the complaint, FICAC says it initiated a thorough investigation and verified all relevant documents relating to the alleged payments, the recruitment process as well as interviewed a number of witnesses including the complainants.

During the course of investigations, Karunaratne withdrew his complaint and as such, did not provide a complete witness statement.

FICAC has established that there were no evidence whatsoever to support any of the false or fraudulent payments claimed and paid by Suresh Chandra and Mohammed Saneem, respectively.

The Commission says all payments made were legitimate payments verified and made in accordance with the Electoral Commission’s Governance and Operational Guidelines.

In relation to the recruitment allegation, it was established that the Fijian Elections Office had followed an open merit recruitment process as per its Human Resources Policy and all staff recruitments and their subsequent upgrading were done legitimately following the due process within the statutory powers vested in that Office.

As a result, the Commission has deemed that the complaint warrants no further legal action.

Meanwhile Chaudhry says they were advised by FICAC this afternoon that the Commission has completed its investigations into the allegations and found no evidence to support the case.

He says the Fiji Labour Party does not regard the matter as closed.

They have instructed their lawyers to take appropriate action in the public interest.

A man in his 30s from Tau Village, Nadroga has passed away following an accident after 9 last night. Police say the victim was driving the vehicle ... 42 minutes ago
LATEST NEWS