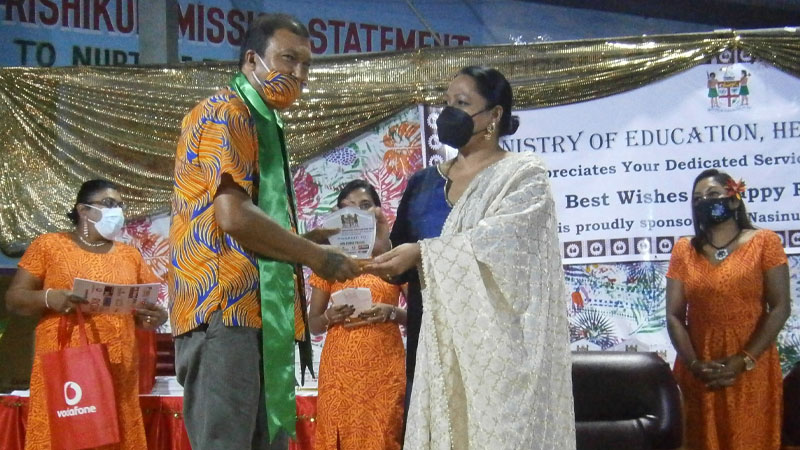 It was an emotional moment for 89 retirees of the Ministry of Education who have been farewelled after their many years of service.

A total of 83 staff of the Education Ministry from the Central Division and six from the Eastern Division were farewelled at Rishikul Sanatan College in Nasinu.

Minister for Education, Premila Kumar says there may have been ups and downs in their careers but at the end of the day, they have contributed positively to the lives and careers of thousands of their students.

She says on average around 110 teachers retire every year.

Kumar adds on average they have over 300 teachers leaving the Ministry for various reasons including resigning, passing on and migrating so there is always a vacancy in the teaching profession.

The Minister says their contracts have been extended until the 4th of April as the academic year for this year ends in April next year.

A 55-year-old Marist Brothers Primary School teacher says becoming a teacher was not her choice because she needed a job after completing her Year 12 studies to support her family.

Alefina Lee says she was the eldest in her family and her parents had to look after her eight siblings, so she grabbed the opportunity of becoming a teacher but later realised that teaching was not a job to earn money but to help the young people achieve their goals and dreams in life.

She says as years went by, she developed the passion to teach and does not regret becoming a primary school teacher.

Lee adds some of her achievements were achieving 100% pass rate in Fiji Eighth Year Examination and helping her Stella Maris Primary School students to win the netball competition several times.

Meanwhile, Early Childhood Education Teacher, Arbina Devi says she has been a teacher for 36 years and her experience was exciting and challenging.

She says she has no regrets of becoming a teacher and she will miss the millions of questions asked by the little ones.