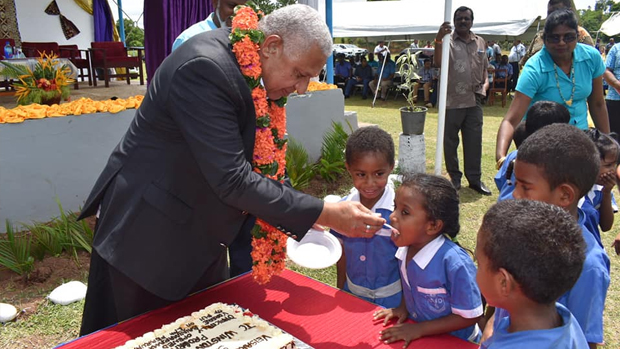 Prime Minister, Voreqe Bainimarama has told the students of Veisaru Sanatan Dharam Primary School in Ba to think of everyday in class not as a chore, but as an opportunity that their parents and grandparents may not have had to go to school.

He told the students that their parents and grandparents did not have as many great career paths at their feet as the students have today.

About 200 primary school students and 20 preschoolers will benefit from the new facility which is an investment of $2.06 million by the Fijian government.

Bainimarama says there was immense damage caused by Tropical Cyclone Winston where homes, businesses, and schools all across Fiji were damaged or destroyed and Veisaru Primary School was no exception. He says due to climate change, cyclones like Winston are going to become more frequent in the years ahead, and it is their duty to keep our students safe from those storms on the horizon. Bainimarama says Veisaru Sanatan Dharam Primary School was established through the foresight of its founders who recognised the critical need for education over 80 years ago.

He says this recognition that has lasted generations, still exists within the Fijians living in Ba today.