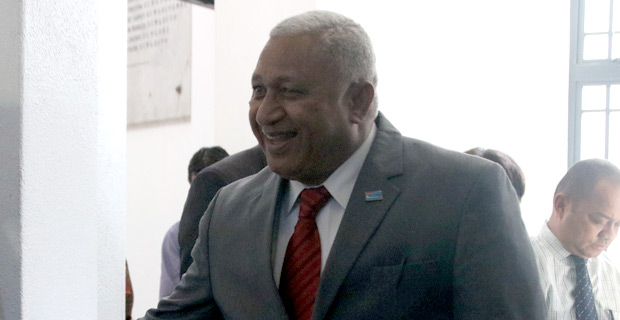 Prime Minister Voreqe Bainimarama says one factor that had an even more devastating effect on the country’s economy than cyclones was Sitiveni Rabuka.

While speaking during the 2018/2019 National Budget Debate, Bainimarama says this is a fact as the economy and the whole country suffered after the 1987 coups.

The Prime Minister also raised concern that SODELPA’s, Aseri Radrodro is claiming in parliament that the Minister for Economy, Aiyaz Sayed-Khaiyum is manipulating the figures about Fiji’s economic growth.

Bainimarama says recognising the need for the infrastructure spending, international institutions and financial experts have praised the government’s budget as responsible.

Bainimarama says these international bodies, from ANZ to World Bank to IMF and Moody’s, are not driven by a political agenda; they are driven by objective facts.

The Prime Minister says the false economic figures that Rabuka touts are, at best, a gross manipulation.

The Prime Minister says when you do the math, the rate for the full SVT term stands at only around half of what he claims: 2.3%.

He also says that the government is focused on providing targeted assistance, and it is an insult to those getting assistance when the opposition keeps referring to it as handouts.

Bainimarama says many Fijians put their trust in him as Prime Minister to provide a straight forward and honest assessment of Fiji.

He stresses that the 2018/2019 National Budget is responsible and the Leader of Opposition has also endorsed the budget.

The Prime Minister says people would probably find that the Opposition Leader has already changed her mind.

Bainimarama says this is not a one‑off Budget during an election year as it is all part of the government’s visionary plan.

He says it is one building block on top of the great pillar of progress that they have already constructed.

Speaking on Rabuka’s claims about China, Bainimarama says while we may laugh, no one should see Rabuka’s irresponsible lies and hypocrisy as comical.

He says Fijians need to see this behaviour for what it truly is as it is a pattern.

He says it is outrageous and very dangerous.