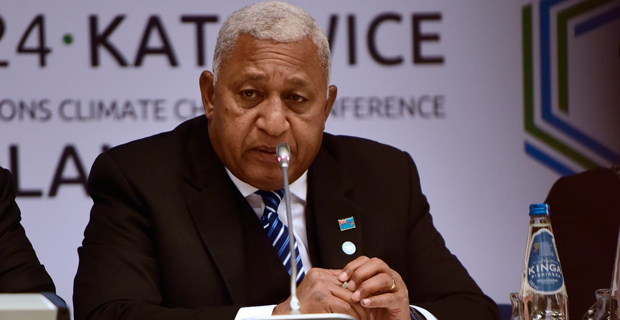 Access to adaptation finance is a critical priority for climate vulnerable nations everywhere and Fiji calls to urgently scale up that access and give this issue a greater focus.

This call was made by COP 23 President and Prime Minister Voreqe Bainimarama while speaking at the COP 24 Adaptation Fund Contributor Dialogue and Reflections from Developing Countries event in Katowice, Poland.

Bainimarama also highlighted that the fund has been successful in harnessing innovative means to mobilise climate finance and has successfully undertaken a range of projects in vulnerable countries such as Fiji.

He stressed that leaders need to summon the political will to do a lot more than they have, given the escalating nature of the climate threat.

Bainimarama also spoke about overseeing the historic decision, that the adaptation fund shall serve the Paris Agreement but more ambition is needed to make climate finance available to meet the goals of the agreement.

Bainimarama also called on world leaders for political will at COP24 and to come to the collective realisation that many more adaptation and mitigation projects will need to be funded not just in Fiji but around the world.