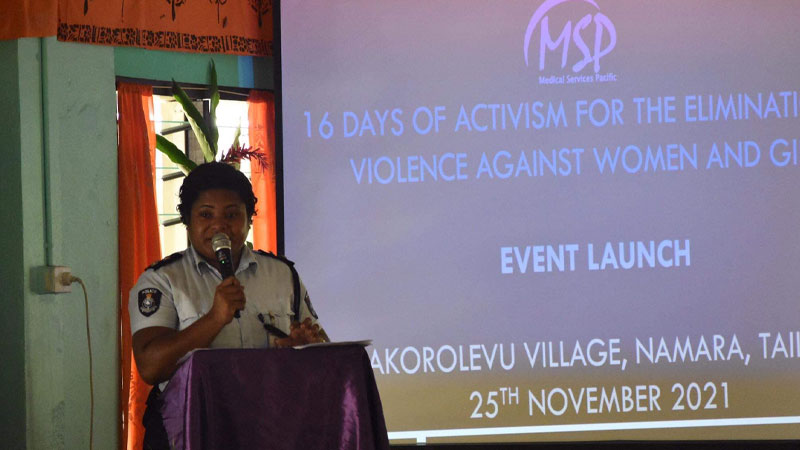 From January to October 2021, the Fiji Police Force received 30 cases of crime against children and 64 cases against women in the Tailevu South Division.

This was highlighted by the Nausori Police Station Community Policing Coordinator Inspector Alisi Wainikula while officiating at the 16 Days Activism Launch in Nakorolevu Village in Tailevu.

She says this is a drop from last year’s numbers where crime against children was 36 and 74 cases were against women.

Wainikula says this shows the good work being done in villages and communities in protecting children and women from violence.

However, the Inspector says there are three challenges faced by the Police Force in terms of eradicating this problem from villages and communities in the country.

She says violence against women and children is an issue faced throughout the country and they are urging men and husbands to love and protect their families at all times.

She adds damaging property is another challenge they continue to face because some people hear rumours and try to take the law into their hands.

Wainikula says they have also noted that breaching of Domestic Restraining Orders is on the rise and they are urging husbands that DVRO is a legal document that can only be removed by the court.

The Inspector also reminded villagers about the safety of children because using corporal punishment to discipline a child is illegal.

She says children are the future of the nation and their safety is paramount.

Permanent Secretary for Health Dr James Fong says health workers and frontliners have done their best for two years to protect as many of us as possib... 27 minutes ago
LATEST NEWS

The Fijian Government says in their effort to assist locals in reaching out to the Tongan victims of the recent volcanic eruption and tsunami, they ... 1 minute ago

Actor Arnold Schwarzenegger has been involved in a car accident in Los Angeles. LA Police say a woman was hurt in the four-vehicle crash, which ... 22 minutes ago

Save the Children says they will join the response to assist families in Tonga affected by the volcanic eruption by establishing temporary learning ... 25 minutes ago