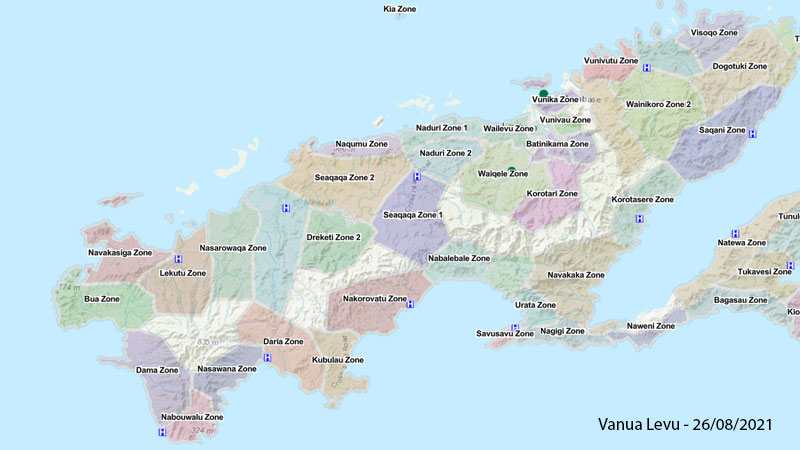 The 3 new cases in Vanua Levu were detected in Namara Tiri Settlement in the Macuata Subdivision.

He tested positive on the 24th of August and subsequently 2 household contacts have also turned positive.

In response to the cases reported today, the Namara Tiri Settlement has been declared a lockdown area.

Checkpoints will be set up at the 2 road entry points into the settlement.

Doctor Fong says most families in the lockdown area are low income earners.

Food and supplies will be supplied through the police checkpoints to individual families with strict COVID measures.

Based on the movements of the index case, a restricted movement zone is also declared for the greater Labasa Town area.

The objective will be to limit the risk of mass community transmission, and to better screen the local population.

Curfew hours will be brought forward to 8pm to 4am for Labasa Town area.

Doctor Fong says curfew hours will be reviewed, if more cases are identified.

Any person in a public place within the Province of Bua and Macuata, must, except with reasonable excuse, wear a face covering in the proper manner, with effect from 27th August, 2021.

Children under the age of 5 are exempt from this requirement.

Supermarkets and shops selling food can open so that people can buy food. Ensure strict COVID 19 protocols are followed.

Banks can open so that people can get money with strict COVID measures.

Pharmacies can open so that people can get medicine with strict COVID measures.

FNPF can open so that people can access funds with strict COVID measures.

Restaurants may not open for in-person dining, but may offer delivery and take-away services.

Other businesses, such as factories and shops, can open as well. However, it is vital that vendors and businesses ensure strict physical distancing before opening their doors. Make sure customers in queues are spaced out by two metres and manage crowding.

Businesses that do not manage these risks with COVID-safe plans will be shut down.

Doctor Fong says they are strengthening their network of screening clinics to keep those with COVID-like symptoms away from vulnerable people who visit Health Centres and into separate, dedicated spaces specially designed to effectively identify possible COVID-19 cases.

Please visit one of the clinics immediately to get tested if you live in the Northern Division and have a runny nose, sore throat, cough, fever, body ache, headache, loss of taste or smell, difficulty breathing.

Meanwhile there has also been a COVID-19 death in Somosomo Village, on Naviti island, in the Yasawas.

This is a 94 year old woman who died at home in Somosomo on 23rd August.

Investigations are underway into how this person became infected, and the Ministry’s response team in the West are conducting contact tracing and testing of contacts to identify more cases on the island.

More information will be provided to the public as investigations progress.

There are 6 more individuals who have tested positive for COVID-19 in Malolo Island.

A medical team from Lautoka has travelled to Malolo Island to assist the onsite medical team with the necessary response, including isolation of cases, contact tracing, and quarantine of contacts.

There have been 230 new recoveries reported since the last update, which means that there are now 19,280 active cases. 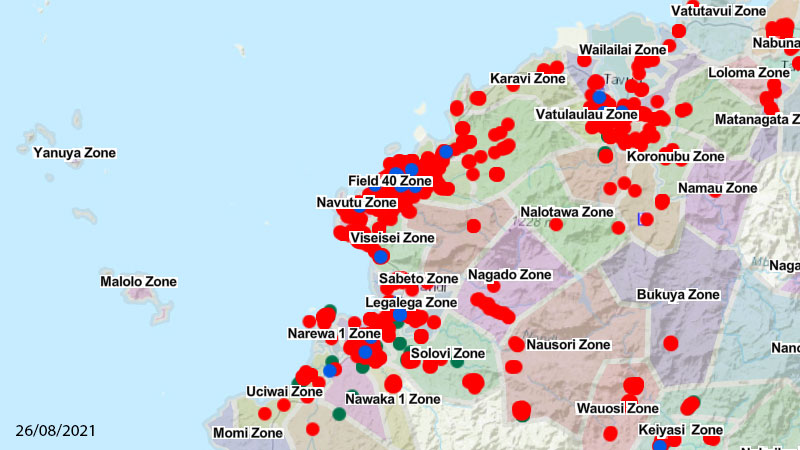 Permanent Secretary for Health, Doctor James Fong says 8 deaths have been reported from the Western Division and 1 death from the Central Division from 19th to 25th August.

The first COVID-19 death is an 84 year old woman from Ba. She presented to the Ba Mission Hospital in severe respiratory distress. She died on the same day on 24th August. She was not vaccinated.

The second death is a 75 year old woman from Lautoka who died at home on 19th August. She was not vaccinated.

The fifth death is a 71 year old woman from Lautoka who died at home on 23rd August. She was not vaccinated.

The seventh COVID-19 death is a 65 year old woman from Rakiraki. She presented to the Rakiraki Hospital in severe respiratory distress. She died on the same day on 25th August. She was not vaccinated.

The eighth death is a 94 year old woman from Somosomo Village, Naviti, Yasawa Islands who died at home on 23rd August. She was not vaccinated.

The ninth COVID-19 death is a 75 year old woman from Sigatoka. She presented to the Sigatoka Hospital in severe respiratory distress. She died on the same day on 20th August. She received the first dose of the vaccine in mid July. She did not receive the second dose of the vaccine.

There have been 11 more deaths of COVID-19 positive patients. However, these deaths have been classified as non-COVID deaths by their doctors.

Doctors have determined that their deaths were caused by serious pre-existing medical conditions and not COVID-19.

With today’s newly reported deaths, there have now been 468 deaths due to COVID-19 in Fiji, with 466 of these deaths during the outbreak that started in April this year.

As of August 21st, the national 7 day rolling average of COVID-19 deaths per day is 7.

The 7 day rolling average for COVID-19 deaths per day is 3 in the Central Division and 4 in the Western Division.

We also have recorded 282 COVID-19 positive patients who died from the serious medical conditions that they had before they contracted COVID-19; these are not classified as COVID-19 deaths.

There are currently 233 COVID-19 patients admitted to hospital.

39 patients are considered to be in severe condition, and 11 are in critical condition.

94.3% of the target population have received at least one dose of the COVID vaccine and 42.9% are now fully vaccinated 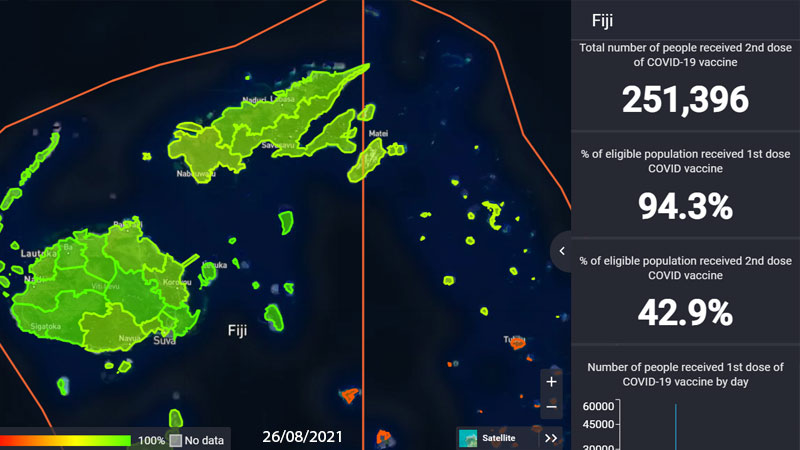 This means that 94.3% of the target population have received at least one dose and 42.9% are now fully vaccinated nationwide.

Permanent Secretary for Health, Doctor James Fong also says the 7-day average of new COVID cases per day is 365 cases per day or 413 cases per million population per day.

He sags they have noted a drop in cases reported per day recently however, the daily testing numbers have also been dropping around the same time, due to the change in testing policy in Suva-Nausori.

Since July 21st, only persons that have a higher risk of developing severe COVID-19 are being targeted for testing in Suva-Nausori.

This was done so that resources could be targeted to early detection, monitoring and care of persons with COVID-19 who are at higher risk of severe disease, to prevent more people succumbing to severe disease and death.

Doctor Fong says we are likely seeing the effect of this testing policy change now in Suva-Nausori with the drop in daily reported cases.

He says this does not mean that the outbreak is on a downward trend in the Suva-Nausori community.

As previously announced by the Permanent Secretary, daily case numbers in Suva-Nausori are currently not being used as an indicator to monitor progress of the outbreak in Suva-Nausori.

The Ministry is closely monitoring other indicators such as test positivity, hospitalisations and deaths to track the progress of the outbreak in Suva-Nausori.

However, even with the decrease in testing numbers, testing remains above the WHO recommended rate of 4 tests per 1000 population per week (or approximately 3500 tests per week).

Doctor Fong says they will be transitioning to community surveillance testing as severe disease numbers and positivity rates approach the containment phase levels.

He says we are seeing increasing cases reported in the Western Division with evidence of widespread community transmission in the division.

Deaths per day at a 7 day average in the Western Division now surpass the Central Division.

The outlook for the cases found in the North indicate a persistent risk of a community outbreak.

Further tracing and testing results are needed to clearly understand the level of community transmission.

All contacts of the first case identified are in quarantine and so far testing negative. The swabbing results from within the Nabouwalu containment area, and nearby communities are also returning negative.

He says the situation in Kadavu and Malolo Island is extremely concerning as there is clear evidence of community transmission on both islands.

They expect the case numbers to escalate together with the risk of severe disease and death.

The death reported today from Naviti Island in the Yasawas is also of concern as it also suggests there is transmission occurring on the island.