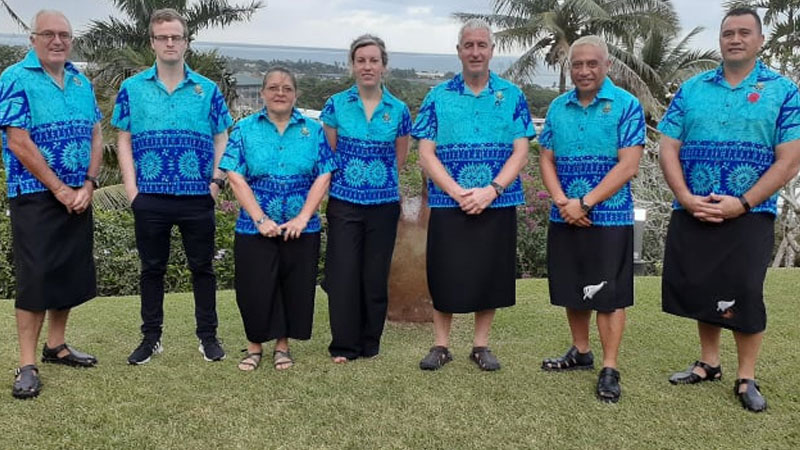 The New Zealand Defence Force Training Team is currently in Fiji where they are sharing their skills and experiences with RFMF, Fiji Navy and the Ministry of Defence and National Security.

New Zealand Defence Advisor, Lieutenant Colonel Josh Wineera says it was not necessarily the defence engagement that got the contingent to Fiji but it was the trust between the two nations health protocols which was the foundation that got them to bring the team across.

He says they were able to talk to the Fijian Ministry of Health and assure them that the New Zealand protocols were up to such a standard that bringing their team would be safe for Fijians.

Meanwhile, Contingent Commander Lieutenant Colonel John Barclay says the Fijian Military has incredible experience with operations where as the New Zealand Defence Forces has experience with the technical aspects where both forces can learn from each other.

He says that even though they are here providing some training, they are also being trained.

Barclay says that this is just the continuation of the development of the ties and the relationship the two countries share and grow.

He adds Fijian soldiers and sailors have been going to New Zealand for training also been spending some time with their units while New Zealand soldiers have also been coming to Fiji.

She says the peacekeeping policy will look at developing some coherent, shared vision on peacekeeping.

New Zealand High Commissioner to Fiji, Jonathan Curr says the relationship that they need are trying to foster are important at the ministerial level and other levels including at the military level.

He says the members of the contingent are here as defence diplomats and not just military specialists and adds that the relationship that they build will be remembered long after they are gone.

The Commander of the RFMF, Rear Admiral Viliame Naupoto says the reason the two countries are doing this is that we are friends and family.

He adds they are honoured to have the contingent present in Fiji at this time especially when there has been a spike in cases of COVID-19 in a lot of countries.

The 16 member contingent arrived on the 24th of last month, spent 2 weeks in quarantine and will remain in the country for another month.

A 20-year-old man will be produced in the Suva Magistrates Court this afternoon charged for his alleged involvement in the Raiwai brawl on ... 31 minutes ago