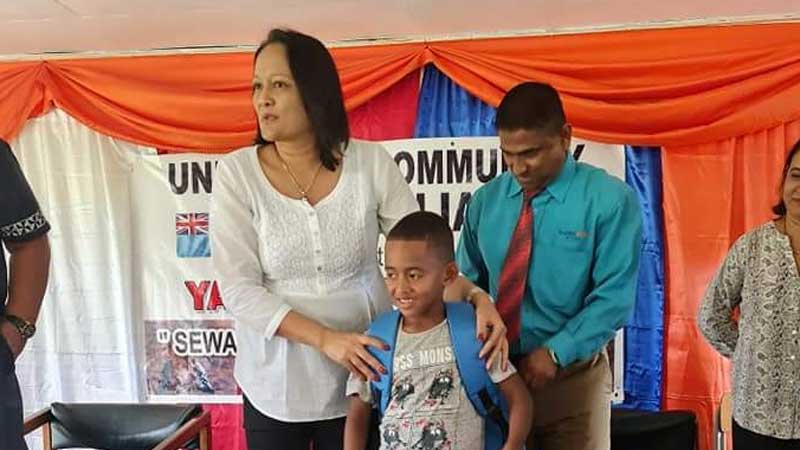 Minister for Education, Rosy Akbar says they have surpassed their target to assist 6000 students in the Tropical Cyclone Yasa affected areas as a lot of people are coming forward to donate.

This follows a donation of $77,500 the Ministry received today from Yaadein Vision which will be used to assist almost 1,200 students in 42 schools.

Each student in these schools will be given stationery packs and school bags.

While speaking at the TC Yasa School Relief Distribution by United Fiji Community Australia and Yaadein Vision at Guru Nanak Primary School in Labasa today Akbar says when the Ministry had initially met with its stakeholders they had planned to assist 6000 students in the most affected parts of the North.

Akbar says some organizations have also approached her to provide shoes and uniform to the affected areas.

She says once the school opens, they will request the heads of schools to send the Ministry a list of the assistance the school needs and then they will be able to assist them.

Akbar has thanked all the stakeholders for their support.

Good news for students as all sporting competitions including the Coca Cola Games and Vodafone Deans Rugby Competition will go ahead this year. Edu... 5 hours ago
LATEST NEWS

Unscrupulous traders have been warned as smuggled goods such as adults and children's wear, school bags and imitation jewellery have been seized by ... 4 hours ago

A man who was employed by an electrical contractor and fell from a power pole and injured himself on the 9th of this month at Malau in Labasa passed ... 4 hours ago

The solution is clear - free tertiary education for all students. That is the comment from SODELPA leader, Viliame Gavoka who is calling on ... 5 hours ago

If you are living in low lying areas and areas adjacent to rivers and streams from Serua to Togalevu in Viti Levu, and Vanua Levu and surrounding ... 5 hours ago
More News
TOP