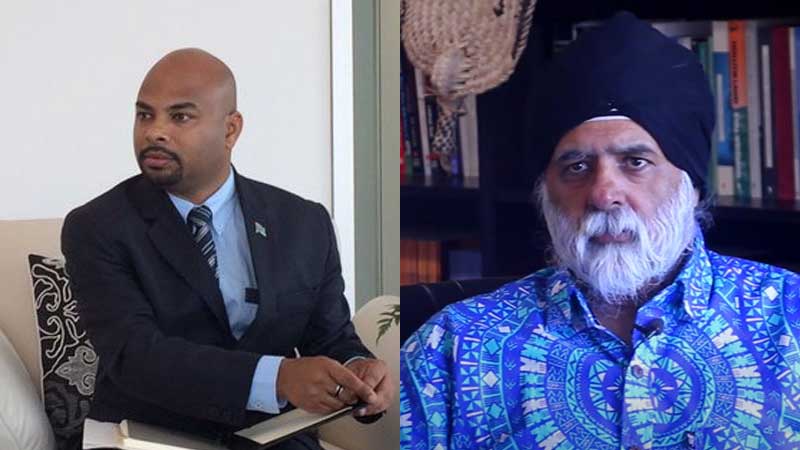 The Human Rights and Anti-Discrimination Commission has established that processes and procedures that were followed in the detention and subsequent deportation of Professor Pal Ahluwalia and Sandy Price were at all times in accordance with law.

Director, Ashwin Raj says the Commission has also established that team that attended to Professor Ahluwalia and Price consisted of Police Officers, Immigration Officials and an officer from the Ministry of Health. He says they were allowed entry into the premises, following specific instructions issued to ensure the safety of Professor Ahluwalia, Price and the team.

Raj says there was no damage to the residence inside or on the outside and all officers present on the premises disclosed their identity through official identification cards.

He says officials were in the premises before curfew.

The Director says phones were taken away after repeated requests by the officials to allow an orderly execution of the process and for the safety and security of all parties present.

Raj says it should be noted that prior to allowing the team into his residence, Professor Ahluwalia had made at least three calls which were unanswered.

He says as the immigration officials exited the premises, the Department of Immigration confirmed that Professor Ahluwalia himself locked the door and handed the keys to the university official present.

Raj says Department of Immigration officials also revealed that prior to leaving their premises, Professor Ahluwalia and Price also participated in a prayer session led by the Deputy Vice-Chancellor.

The Director of Human Rights Commission says the Fijian Immigration Department has refuted the allegation that Professor Ahluwalia and Price were at any time roughed up or manhandled.

He says a subsequent media interview given by Professor Ahluwalia states that his wife was particularly courageous all throughout the ordeal and she was the one who smuggled in a phone to call while in detention.

Raj says from this, it seems that the couple was able to make phone calls whilst in detention.

He says both were then given an opportunity to pack their belongings and thereafter departed for Nadi Airport and during the course of travel from Suva to Nadi, the team made a stop to allow Professor Ahluwalia and Price to use bathroom facilities in Maui.

Raj says the Department of Immigration has refuted allegations with respect to degrading treatment given to Price.

He says when the team was allowed entry into the premises, Professor Ahluwalia and Price were advised not to use their phones given security concerns and Price advised she was dressed inappropriately and wished to change.

The Commission says Professor Ahluwalia and Price were transported to Nadi Airport early in the morning, they were provided with breakfast which included egg and cheese sandwiches, assorted muffins and a hot beverage upon arrival at the Nadi Airport and were accommodated at the VIP lounge at the Nadi Airport.

Raj says Professor Ahluwalia was a diabetic and took medication for his health.

He also says numerous requests were made by the Deputy Vice-Chancellor to Professor Ahluwalia to write down the list of medication that he requires and the times at which they were to be administered for the benefit of the team, however Professor Ahluwalia refused to provide the same.

The Department of Immigration has confirmed to the Commission that at all times Professor Ahluwalia had a small yellow suitcase of medication which was with him during the travel from Suva to Nadi Airport and has refuted the allegation that Professor Ahluwalia did not have access to his medication.

He says Professor Ahluwalia also informed the team that he had his medication in his backpack which he was carrying at all times.

These allegations include USP staff being coerced into signing petitions in favour of the Vice-Chancellor by heads of various sections of the university or face non-renewal of contracts, unfair discrimination as well as victimization for speaking out because staff are considered either for or against the Vice-Chancellor, nepotism and unmeritorious appointments, lack of transparency and consistency in the application of policies and procedures in relation to appraisals and inducements, lack of confidence over the independence of grievance reporting procedures and mechanisms because heads of unions are openly biased,, suspension of staff who are suspected of being whistleblowers.