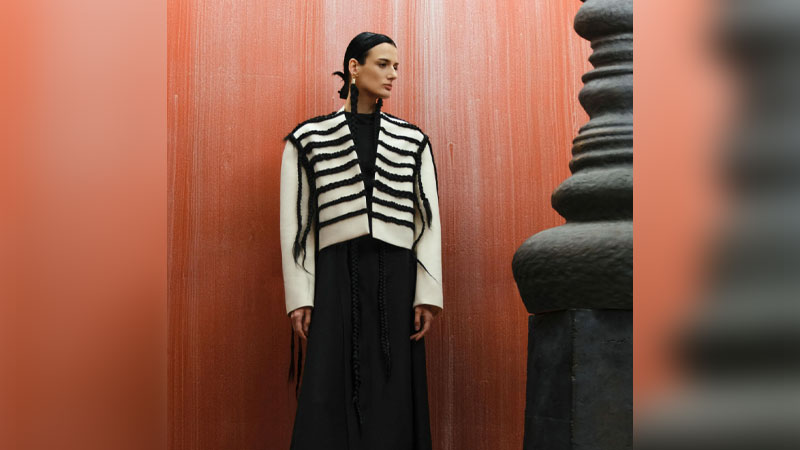 Lili Litkovskaya is the only Ukrainian designer known to be in Paris.

She’s using her position to showcase Ukrainian talent and mobilise the fashion community to protest the ongoing war, with the support of Tranoï and Fédération de la Haute Couture.

The day before Russia invaded Ukraine, designer Lili Litkovskaya was busy with fittings for an exclusive pre-fall collection with Selfridges. One week later, she was fleeing Kyiv with her two-year-old daughter and a small bag of belongings.

Now, as the only Ukrainian designer known to be at Paris Fashion Week, she’s turning her previously planned showroom into a showcase for other Ukrainian talent and urging the fashion community in Paris to rally for peace.

“We have nothing here. We don’t even know what’s happening with production or our studio,” she says. “I saw the news and every hour something is bombed. Many people are dying. Our hospitals, schools and universities have been destroyed. This is a true war. This concerns every one of us. Ukraine is a saviour for everyone right now.”

Instead of presenting her collection at the Tranoï trade show, which runs parallel to PFW, Litkovskaya will showcase 45 Ukrainian designers who couldn’t make it to Paris, including Ruslan Baginskiy, Anton Belinskiy and Vita Kin. Underneath a Ukrainian flag, the showcase will make use of QR codes to link to each designer’s Instagram feeds. It opens Friday, 4 March at 10 am. Pascal Morand, president of the Fédération de la Haute Couture et de la Mode, and Boris Provost, president of Tranoï trade show, will be present for the opening to show their support for the project.

“Right now, I don’t feel like a designer. I feel like a Ukrainian who has a chance to speak and show up for all other Ukrainians,” Litkovskaya says from the Tranoï venue in Paris’s La Bourse, where she’s setting up her showcase. “It's not about my feelings. I am a part of Ukraine.”

On Saturday, 5 March at 3 pm, Litkovskaya is inviting the fashion community to show its support for #StandByUkraine and join her at the official anti-war demonstration that will gather at Place de la République. At Litkovskaya’s request, Pascal Morand will add the demonstration to the official Paris Fashion Week schedule.

“I just got off a call with Mr Morand and he agreed to support us, sharing the exact time and place on the official schedule so the fashion community can unite,” Litkovskaya says.

The man alleged to have murdered a 35-year-old farmer during an argument out at sea between Laucala Island and Taveuni last week has been ... 3 minutes ago

A relative of the man whose body was found under the Vatuwaqa Bridge earlier this week has come forward. Police say the victim has been identified ... 3 minutes ago